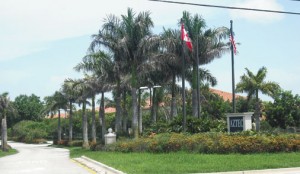 A property in South Florida once occupied by the working poor could soon become home to the mega-wealthy on wheels.

In September, Margate is expected to become the first city on Florida’s east coast with an upscale RV park. Until it closed in 2007, Aztec Estates mobile home community filled the 104-acre site on the east side of State Road 7 and south of Southgate Boulevard, according to the Fort Lauderdale Sun-Sentinel.

The Broward County Commission has unanimously approved a needed rezoning. If state and city officials also sign off on the deal as expected, developers hope to fill the new Aztec RV Resort with rich Snow Birds enjoying a nine-hole golf course, a forested backdrop and a scenic canal. They will live aboard luxurious motorcoaches that cost more than $200,000, on lots starting at $108,000. About a quarter of the park’s RVs are expected to cost more than $1 million.

“These are the ones rock stars use when they tour,” Margate Vice Mayor Frank Talerico said. “It’s not a camping park -– it’s pretty high-end. People with a lot of discretionary income have these things.”

About 20% of the park’s 646 lots have been sold — all to buyers, mainly Canadians, who paid with cash, said sales manager Jean-Francois Leblanc.

After the Aztec mobile home park closed, the property was rezoned to accommodate a development with 707 single-family homes, townhouses and condos. After the housing market bust, that plan never materialized.

In March 2009 a group of nine Canadian investors bought the land for $17 million and dropped another $23 million on improvements including new sewers and water lines, more than 27,000 trees and other landscaping. 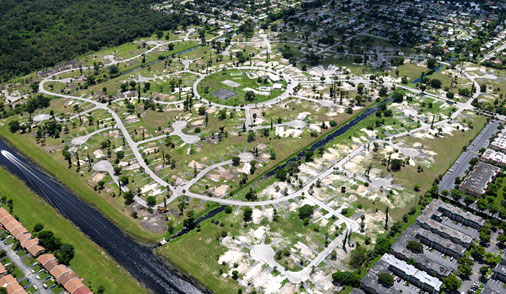 Aerial view of the new Aztec RV Resort in Margate, a northern suburb of Miami, Fla. This photo was taken before some 27,000 trees were planted on the 104-acre site.

They used Pelican Lake Motorcoach Resort in Naples as a model. Salesmen tell clients the Margate resort will be even nicer, with tiki huts for picnics, a playground and shuffleboard court and optional upgrades such as fountains, outdoor kitchens, fire pits and roll-up screens for outdoor movies.

Sales brochures are printed in both French and English for the mostly French Canadian clientele they are trying to reach and both U.S. and Canadian flags fly at the State Road 7 entrance to the RV park.

Another attraction directed at Canadians will be a court for petanque — a sport resembling lawn bowling and bocce that’s very popular in France.

Frank Cannatelli, a Quebec businessman, bought five lots -– one for him and his wife to use in winter, the others to either rent for income or flip once the park is sold out.

“There’s nothing else like it,” he said. “The airport is close, the casino is close, the beach is close. There’s lots of things to do.”

Margate Mayor Joe Varsallone said he was impressed with the plans.

“The type of people that will be moving in are people who are very, very financially sound, no question about it,” he said. “There will be (property) tax revenue for the city of Margate and also revenue for stimulating the economy — these people are going to have to patronize the different businesses in Margate.”

Though final approvals are still pending, construction is well underway at the RV park. Decorative lanterns mark each lot and the security fence is nearly complete.

Chester Watson, a retired owner of used car lots from Montreal, spent Monday touring the park and said he is thinking about buying a lot to use in winter. “It’s going to be like five stars,” he said.