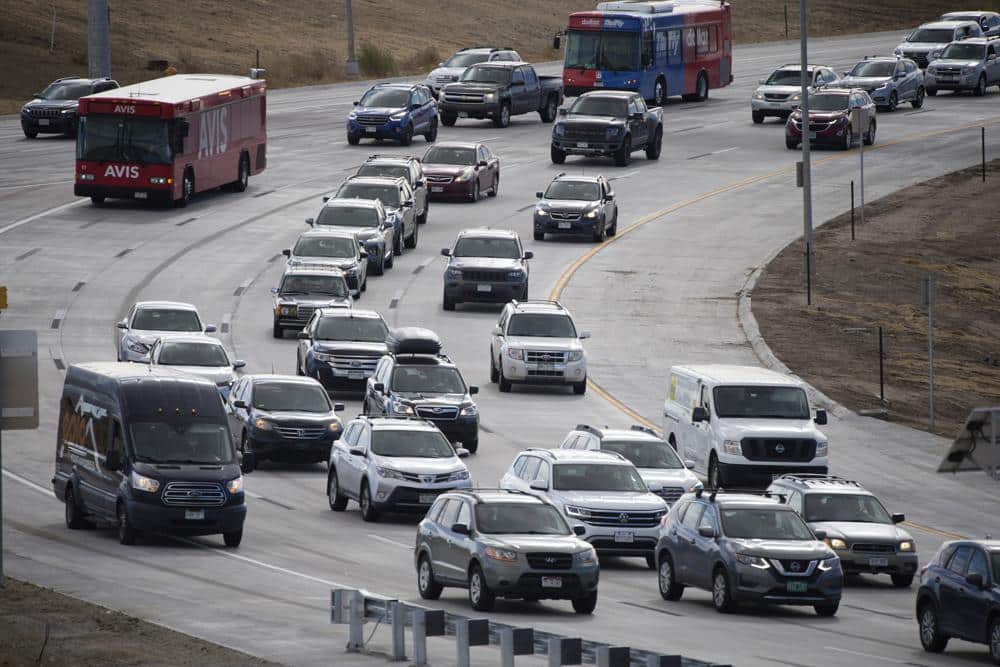 Motorists move slow on Pena Boulevard as traffic increases with the approach of the Thanksgiving Day holiday at Denver International Airport in Denver. (AP Photo/David Zalubowski)

Determined to reclaim Thanksgiving traditions that were put on pause last year by the pandemic, millions of Americans will be loading up their cars or piling onto planes to gather again with friends and family, according to an Associated Press report.

The number of air travelers this week is expected to approach or even exceed pre-pandemic levels, and auto club AAA predicts that 48.3 million people will travel at least 50 miles from home over the holiday period, an increase of nearly 4 million over last year despite sharply higher gasoline prices.

Many feel emboldened by the fact that nearly 200 million Americans are now fully vaccinated. But it also means brushing aside concerns about a resurgent virus at a time when the U.S. is now averaging nearly 100,000 new infections a day and hospitals in Michigan, Minnesota, Colorado and Arizona are seeing alarming increases in patients.

The seven-day daily average of new reported cases up nearly 30% in the last two weeks through Tuesday, according to figures from Johns Hopkins University. The U.S. Centers for Disease Control and Prevention says unvaccinated people should not travel, although it is unclear whether that recommendation is having any effect.

More than 2.2 million travelers streamed through airport checkpoints last Friday, the busiest day since the pandemic devastated travel early last year. From Friday through Monday, the number of people flying in the U.S. was more than double the same days last year and only 8% lower than the same days in 2019.