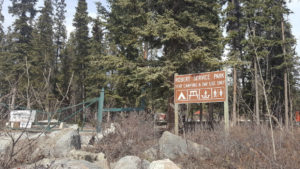 The city of Whitehorse in Ontario is planning some upgrades to the Robert Service Campground, including renovations to the office and washrooms, and construction of a new event facility.

The city takes over the operation of the downtown park this summer, after not renewing a lease with a private operator, according to CBC News.

“The city of Whitehorse took a look at the future of the Robert Service Campground and decided they just wanted to go in a different direction,” said Doug Hnatiuk, manager of the city’s parks and community development branch. “Certainly we see an opportunity here to be able to improve some of the infrastructure.”

The campground with 68 sites on the Yukon River is designed for tent campers and is popular for summer visitors and workers as it’s within walking distance from the downtown core.

Hnatiuk said there are no major changes planned for the next two summers, beyond a “bit of a facelift” for the washrooms and office. Otherwise, it will be “pretty much status quo, in terms of the operation.”