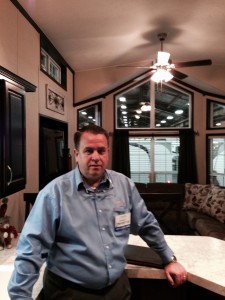 EDITOR’S NOTE: The following is an opinion piece written at the request of RVBusiness, sister publication to Woodall’s Campground Management, by John Soard, general manager of the park model division of Fairmont Homes of Nappanee, Ind., and chairman of the Recreation Vehicle Industry Association’s (RVIA) Park Model RV Committee. Soard has worked in the RV industry since 1984, the last 29 years in the park model sector.

Most of us who work in the recreational vehicle business saw this recent news item that speaks to the possible resolution of an issue that surfaced last fall and was especially unsettling for those who manufacture, sell and utilize park model RVs in U.S. RV parks and campgrounds:

“In a memorandum dated Jan. 20, Department of Housing and Urban Development (HUD) Administrator Pamela Beck Danner announced that HUD will not be enforcing its interpretation that park model RV porches count toward the 400-square-foot limit (as measured) on those types of RVs until new regulations defining RVs are published.

“According to a news release, this memorandum supersedes a memorandum that Danner promulgated on Oct. 1, 2014, in which she sought to clarify the measuring process for park model RVs, stating that factory-built porches do count toward the 400-square-foot park model RV limit and that HUD would enforce this measurement criteria starting on April 1, 2015.

“However, on Dec. 2, 2014, the Manufactured Housing Consensus Committee (MHCC) recommended that HUD further delay enforcement to this measurement criterion until new rules are published better and more clearly defining today’s RVs. By this most recent memorandum, HUD has accepted that MHCC recommendation, making the April 1 deadline for park model RVs moot.

So, imagine that while driving to the Green Bay RV Show shortly thereafter, and RVB Publisher Sherman Goldenberg calls and asks you to write an opinion on the aforementioned story.

So, let me start by saying that the park model industry has certainly not been a stranger to the ambiguity of HUD’s “definition” of an RV. For nearly the past three decades, operating under the 400-square-foot limitation (in the U.S.), park models have evolved to include lofts and porches, along with the pertinent regulations addressing those options — much like the other segments of the RV industry have evolved to include toy haulers, outdoor kitchens, travel trailers up to 400 square feet and even larger fifth-wheels.

But let’s be fair, HUD’s RV “definition” was actually part of an RV exemption — 24 CFR 3282.8 (g) — from regulations in a housing law designed to regulate permanent residential housing, not RVs.  The time has finally arrived to fix this state of affairs.

Since October, when the original HUD enforcement position was released, there has been what I would consider unlikely alliances formed as a result. For example, in my recollection I don’t ever remember seeing RVIA, the Recreation Vehicle Dealers Association (RVDA), National Association of RV Pasrks & Campgrounds (ARVC), Manufactured Housing Association for Regulatory Reform (MHARR), Manufactured Housing Institute (MHI), and Manufactured Housing Consensus Committee (MHCC) all agreeing on something that on the surface appears pretty controversial and territorial in the whole “RVs versus manufactured housing debate” that has been brewing for years.

It is positively refreshing, from my vantage point, to see this level of participation and cooperation from the major players in this arena to pursue a reasonable consensus-based resolution properly separating RVs and manufactured homes.

The recommendation from the MHCC at its December meeting to revise CFR 3282.8 (g) properly defining RVs and listing the NFPA 1192 and the ANSI 119.5 consensus standards as the RV/PMRV benchmarks is something the housing and RV industries can and most likely will support because it kills two birds with one stone. This recommendation plainly clarifies the RV definition and the standards to which they must comply and does not change the original HUD position on porches — sweet and simple, I think. It also solves the issues that both sides have by placing a suitable firewall between RVs and HUD – regulated “Manufactured Homes.”

I can see this issue being resolved amicably sooner than later. In fact, I am aware that RVIA’s staff is already working with their housing counterparts to land on the proper wording of this proposal to get a final draft accomplished as soon as possible. I am also aware that, quite frankly, the manufactured housing entities have deeper issues than RVs that they need to address with HUD administrator Danner, whose office has been busy issuing memoranda relative to housing that are potentially much more problematic to their industry than the definition of an RV has been to our industry.

It’s important for us in the RV industry to keep in mind that once this current HUD/RV definition issue is resolved, it does not simply mean that the RV industry is forever immune to any further HUD actions. The resolution proposed by MHCC is primarily that – a resolution to an issue brought up by HUD. When or if (hopefully never) the next RV/PMRV issue comes from HUD, whatever that issue may be, it will need to be addressed and resolved in this same efficient manner.

And I will submit my personal opinion that the current people involved in all this — the parties most likely affected by any such issue — are very different and appear to be better suited for a productive debate than the people who were around back in the late ‘80’s and early ‘90’s and are, in my humble opinion, more likely to form a reasonable consensus.

I’m glad to see this issue appears to be on the road to a resolution. I am hopeful we all will agree soon and that HUD will concur and accept the proposed resolution once it’s completed because the sooner that happens the sooner we can all focus the next discussion on how to resolve the “Tiny House” issue that has suddenly plagued both the RV industry and the housing industries.