One thing all RVers must do on occasion is empty their holding tanks. But there’s a problem: in these tough economic times, many RV dumping facilities are closing. Other things are deemed more important to cash-starved government agencies that have traditionally operated dump stations as a public service. Businesses close their RV dumps rather than operate at a loss.

Enter Sani-Star and Eric Huffman of Sisters, Ore., who sees an opportunity. Sani-Star, founded in 2009, envisions fully automated, turnkey, RV dump fee collection systems throughout North America, where those who operate them can cover their expenses or make a profit. So far more than 300 Sani-Star facilities are in use in the United States and Canada, according to a news release.

Operating a dump station is not cheap. Public sewer rates are rising every year and the cost to maintain private septic systems and pump holding tanks, common in remote campgrounds, are significant. “A campground with a 4,000 gallon underground holding tank would cost more than $1,000 to pump,” said Huffman, Sani-Star’s director of sales and marketing. “An average pumping fee is about 25 cents a gallon plus round trip mileage by the truck. If you figure the average RV releases about 25 gallons per dump, that’s only about 160 uses until a tank that size is filled.”

Huffman said his surveys show that only about a third of RVers pay at honor-box fee locations. “That’s not good for the bottom line,” he noted. A key and lock system, also a common fee collection method, is labor intensive, slow and inconvenient for the RV dump consumer.

The Sani-Star system uses a patent-pending locking sewer cap that opens after payment and re-locks after dumping, eliminating no-pay drive offs. Customers pay by cash, custom token, coin or credit card at the dump station’s kiosk or, if a merchant chooses, inside its store. There is also a reprogrammable keypad payment option. The system is currently in use at all Pilot-Flying J Travel Center RV dump stations across the U.S., where spot surveys have shown higher fee compliance for Sani-Star sites compared to the traditional honor payment system.

Most locations charge between $5 and $10. A private RV campground and service center in Quartzsite, Ariz., charges $15. “They can charge whatever they want,” explained Huffman. “Most of our customers, especially government campgrounds, just want to offset or cover their costs. Others want to make a profit. Our system, very simply, is a much more effective mechanism for collecting a fee than anything else out there. British Columbia Provincial Parks has several Sani-Star installations. The parks tried to collect $5 for years using an honor box. They didn’t realize how poor their fee compliance was until they installed our system. Now fee compliance often doubles and even triples in some campgrounds, ultimately helping the parks run more efficiently. A similar result has occurred in many city, county and National Forest campgrounds across the USA.”

Dump station operators pay Sani-Star a onetime fee to set up the system and then a monthly fee (revenue sharing is also available). The operator pays for installation of electricity to power the Sani-Star kiosk (a solar or battery-only option is available for remote locations). Sani-Star also provides parts and 24-hour phone support for its system above ground including the kiosk, payment mechanism(s) and the locking sewer cap for the life of the service agreement. No attendant is required, which allows for efficient 24-hour operation.

“The goal with our program is for the dump station, at the very least, to generate enough income to justify keeping it open,” said Huffman. “If the goal is to make a profit, so much the better. So far, our customers are happy with the results.”

More information about the Sani-Star system, including a video demonstration, is available on its website http://sanistardump.com or by calling (888) 611-9283.

Some Sani-Star installations appear below: 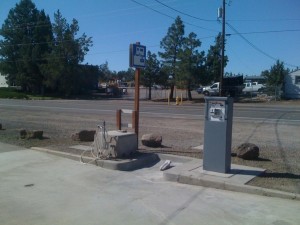 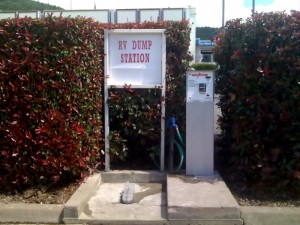 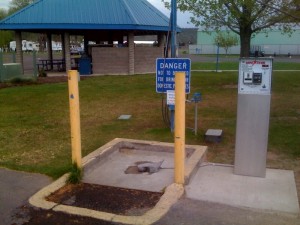