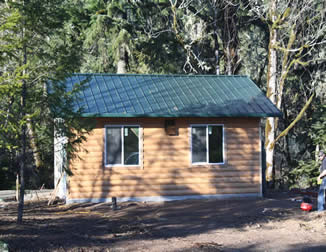 One of the new cabins at River Bend Campground near Cascadia, Ore.

There was “severe erosion” at the hiking trails at Roaring River Campground, Park Director Brian Carroll told the county commissioners on Tuesday (Feb. 21).

Most of the county’s campgrounds are in the Sweet Home area and were not damaged, Carroll said.

The $224,024 project will be funded by a grant from the Oregon Parks and Recreation Department with a match from the state RV fees program.

Carroll said completion of the second phase of construction brings the total number of camping sites to 85 at River Bend, and two of five planned cabins have been constructed overlooking the South Santiam River.

“We are seeing strong demand for cabin rentals,” Carroll said. “There are still some dates open mid-week and even a couple weekends, but they will go fast.”

Carroll said he estimates each cabin will pay for itself in about two years. They sleep six people. The units were built by parks crew staff.

The commissioners also approved a 25-year lease with the U.S. Corps of Engineers for Sunnyside Campground, which sits on Corps property.

Carroll said there is no fee involved.

As of 2011, the county also manages six U.S. Forest Service campgrounds in the Cascadia area east of Sweet Home.

The annual operating budget is about $1.1 million, most of which comes from parks fees, with only about 9 percent from the county’s general fund.