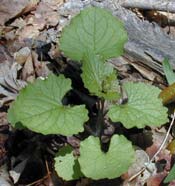 Tucked behind a Valley of the Rogue State Park campground in southwest Oregon lie scattered patches of a nasty invader that’s threatening to turn parts of the Rogue River’s riparian areas into native plant wastelands.

“They seem to be partners in crime,” says Sam Whitridge, coordinator of the Rogue Basin Coordinating Council (RBCC) waging war this spring on garlic mustard.

The RBCC organized volunteer garlic mustard pulls on April 21 at Valley of the Rogue and again at the park May 19.

The group also is hosting a two-hour training beginning 9 a.m. May 5 at Valley of the Rogue to teach as many volunteers as possible how to identify, survey and report garlic mustard patches for removal.

Early detection and removal are considered the easiest, least-damaging and most cost-effective way to keep the Rogue Valley from joining moist woodlands from the Atlantic to the Mississippi that are overrun by this most obnoxious of noxious weeds.

Participants will see exactly what the little, white four-pedaled flowers on the long, green stems look like just in time to start surveying for the weed, which blooms for up to a month in spring and summer but its seeds can live and scatter for years.

The council plans to send fliers to nearby landowners asking them to keep their eyes peeled for the plant.

Getting as many volunteers as possible to survey these areas will provide the foundation for a garlic mustard control plan for southwestern Oregon, Whitridge says.

“We’re trying to get as many pairs of eyes looking for us as possible,” Whitridge says.

The RBCC has a $25,000 grant from the Oregon State Weed Board to fund detection, garlic mustard removal — either manually or with herbicides — and other work through June 30.

Garlic mustard was imported in the 1860s to the Eastern United States from England, where it was used as a medicinal herb.

Safe from natural predators, it spreads quickly amid riparian woodlands and is one of the few plants that can thrive beneath Himalayan blackberries.

The plant first showed up in the Columbia River basin in the 1950s, and it has been listed in Oregon as a noxious weed since 2006.

The seeds can live for five years, and are transported by several modes, including air, flowing water, shoe soles and amid dog fur.

“That’s why it’s all over the place here,” says Whitridge as he strolls through Valley of the Rogue’s campgrounds. “This place is Dog Central.”

And the plant is cunning. It secretes poison into the soil that kills surrounding native plants, thus giving it more room for expansion.

Foragers such as deer and elk avoid the plant, so there is nothing to keep its numbers in check.

In its first year, the plant is a relatively innocuous basal rosette with kidney-shaped leaves that can thrive unnoticed by landowners not in tune to its seedy side.

In its second year, the plant blooms and produces about 5,000 seeds.

The effort now is to find and destroy as many of the 2-year-old plants as possible, with May being a hot time for garlic mustard blooms.

So far, the plant has been found in 25 sites covering about 55 acres from Kelly Slough down to the Hog Creek Boat Ramp, a span of about 40 river miles.

“It seems to be prevalent at these recreational use areas where people travel in and out,” Whitridge says.

Valley of the Rogue is considering putting a boot-washing and dog-washing station to curb the spread of seeds.

“We’re trying to engage the public as much as possible,” he says.