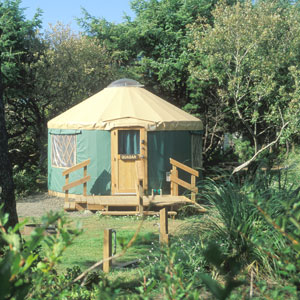 Click here to see images of some of the yurts in Oregon’s state parks.

They were shaped like a pair of oversized knit hats, had a name that suggested either a type of bird or a communicable disease, and when Oregon Parks and Recreation Department officials installed them at Cape Lookout State Park nobody was sure what to expect.

The year was 1994 and the structures were called “yurts,” a modernized version of the Mongolian-style tent perhaps best known for being Genghis Khan’s abode of choice during his conquest of Eurasia.

Oregon’s state parks had a different use for them.

Outfitted with a heater, electricity, coffee table and bedding for five, the circular domed tents were intended to lure people who enjoyed the outdoors but not sleeping on the ground.

“We had absolutely no idea what people would think of them,” recalled Chris Havel, a spokesperson with Oregon Parks. “We weren’t sure ourselves.

“We were trying to reach people who had less time for vacations, who didn’t want to spend time dealing with a bunch of camping equipment. It seemed like a pretty good idea.”

The Mongolian tents became a sensation almost overnight, filling up campgrounds, making national news and eventually spreading from Oregon to parks in 17 other states.

From those first two yurts at Cape Lookout, there are now more than 200 structures at state parks across the Beaver State. Umpqua Lighthouse State Park even has a pair of “deluxe yurts,” which sleep 10 people and have a bathroom, kitchenette, microwave and gas grill outside.

Genghis Khan never had it that good.

“It’s cozy and warm, with plenty of space, but it still feels like camping,” said Pete Dolan, customer service manager at Cottage Grove-based Pacific Yurts, the first company to manufacture the modern yurt design in the United States. “You can still hear the natural surroundings, the birds chirping and the wind blowing, but it’s also very solid. It’s such a unique experience.”

The yurt’s impact has been greatest on the Oregon Coast, where that warm and cozy shelter has made winter trips a more feasible experience. When the weather is good, people can explore beaches, watch whales and hike coastal forest. But when the weather turns ugly — a common occurrence — there’s a large, well-lighted shelter to play board games, read books and sip beverages while the storm rages outside.

Floorplan for a basic yurt in Oregon state parks.

“With the windows and Plexiglas skylight, you can enjoy watching the storm without getting hammered by it,” Havel said.

The year-round appeal was one of the possibilities dreamed up by Craig Tutor, the driving force behind the “yurt revolution,” almost 20 years ago.

A long-time employee of Oregon Parks, Tutor got the idea of putting them in state parks when he saw a Pacific Yurts exhibit at the Oregon State Fair in 1993.

“Something just started clicking in my brain,” Tutor said in a 1999 interview with the Statesman Journal. “The whole purpose of this program wasn’t for summer campers, it was for off-season tent campers.”

The greatest testament to Tutor’s vision?

“If you want a yurt, you better make a reservation,” Havel said. “They stay popular all year-round, in summer and in the middle of January.”