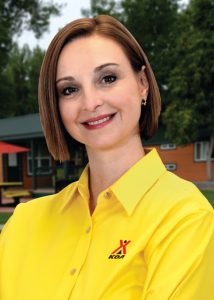 The campground business is growing and it’s being bouyed by a variety of factors beyond record RV sales, according to Toby O’Rourke, president of Kampgrounds of America Inc. (KOA).

Speaking to a packed crowd on day two of the annual Spring Meeting of the Texas Association of Campground Owners (TACO), O’Rourke said the RV industry is seeing its highest shipment levels in 40 years and that shipments of towable and motorized units this year are expected to surpass last year’s record figures.

According to a press release, O’Rourke noted that the campground industry is benefiting from ongoing marketing efforts by the National Park Service and the national Go RVing campaign.

“Go RVing itself has done some nice marketing in recent years,” O’Rourke said as she showed a Go RVing television advertisement featuring retired Pro Bowl offensive lineman Keith Sims, and his wife, Tia, and their children. Calling themselves the Soulful RV Family, the Sims are raising awareness of RVing and camping in the African American community.

O’Rouke also cited the positive impacts of other organizations on the campground industry, including  OutdoorAfro.com and LatinoOutdoors.org, which are encouraging African Americans and Latinos to take part in hiking, camping and other healthy recreational activities.

KOA is seeing the impact of these marketing and outreach efforts and RV sales in its annual camping reports, which it has produced each year since 2014.

“There are tremendous shifts happening in camper profiles and camper behavior,” O’Rourke said, adding that 75% of camping households are Millennials or Gen Exers. “At least 6 million households started camping in the last few years and KOA has experienced 70% compounded growth in its business since 2012.”

Many of North America’s newest campers are also from different ethnic groups.

“We’re seeing a lot more diversity come into camping,” O’ Rourke said, adding that 49% of new campers last year were from multicultural groups, with 17% being Asian, 17% Hispanic, and 14% African American.

“This is really, really promising,” she said, noting that African Americans were also the most likely ethnic group to purchase or try RVing last year.

O’Rouke said the campground industry is also bouyed by RV rentals, particularly the Airbnbs of the RV business, including Outdoorsy, Mighway, Campanda and RVshare, as well as people who simply borrow RVs from friends or family.

“Four in 10 RVers do not own their RV,” O’Rourke said. “Twenty-eight percent borrow from friends and family. Others are renting.”

And regardless of whether people own their RV, rent or borrow one, or camp in a tent or park model RV or other rental accommodation, they share their experiences on social media, further fueling the growth of the industry.

“As people see this,” O’Rourke said, “they are more likely to try camping themselves.”

In an effort to keep up with growth and to remain competitive, KOAs in Texas have invested $13.5 million in improvements and modernization efforts in recent years, with three new KOAs under construction. “Any time you start to see new campgrounds come in, that’s a good indicator,” O’Rourke said.