Based on the level of access its earning with key legislators and federal department agencies — including a presentation by the U.S. Department of Labor at its Dec. 3 board meeting in Washington D.C. —  the Outdoor Recreation Roundtable (ORR) in a relatively short period of time has successfully gained the coveted “spot at the table.”

ORR members from 39 associations representing a combined 100,000 outdoor recreation businesses attended the meeting, during which Labor Department Assistant Secretary for Policy Jonathan Wolfson outlined the importance of the outdoor recreation workforce and how the DOL can help through apprenticeship and training programs. In addition, Wolfson discussed compliance issues and how outdoor recreation trade associations and their member businesses can better serve their employees with regard to healthcare, retirement and other benefits.

“It was great to have the Department of Labor spend some time with us. It was a really good addition to the work that we’ve been talking about over the past year,” said ORR Executive Director Jessica Wahl, the former Outdoor Industry Association (OIA) executive who directed the group’s outdoor recreation portfolio in Washington D.C. She joined ORR about a year ago, succeeding Derrick Crandall, who stepped down after successfully integrating the ORR with the American Recreation Coalition (ARC).

“And then we had a full day of Capitol Hill meetings,” Wahl continued, adding that ORR members met with Sen. Chuck Schumer (D-N.Y.), Sen. Martin Heinrich (D-N.M.), Sen. Ron Wyden (D-Ore.) and Sen. Joe Manchin (D-W.V.), as well as Rep. Rob Bishop (R-Utah), the ranking member of the Natural Resources Committee in the House of Representatives.

“We also met with the U.S. Forest Service, talking with their leadership about partnerships and campground modernization,” Wahl pointed out. “So, all in all, it was a really successful week. ORR made a huge impact both on just continuing to drive the economic impact of the outdoor recreation economy, putting faces with names with senior leaders in Congress, and then moving the needle in Forest Service discussions around how we can be helpful and just ensure that customers and visitors have the best access possible to our public lands.”

In other action, ORR welcomed two new agencies to its member roster, including the Diving Equipment and Marketing Association (DEMA) and the Recreational Boating and Fishing Foundation (RBFF), as well as celebrating the retirement of several board members, including Thom Dammrich of the National Marine Manufacturers Association (NMMA), whose role as ORR board chairman was filled by Phil Ingrassia, president of the National RV Dealers Association (RVDA).

Wahl spoke with RVBUSINESS.com, sister publication to WOODALLSCM.com, about several initiatives and issues, the edited transcript of which follows.

RVB: It sounds as if, in a relatively short amount of time, ORR has been granted a seat at the table, so to speak.

Jessica Wahl: Yes, I would say so. It’s actually been fascinating for me because I’ve been in this (outdoor recreation) world for a while now, and you just don’t get six member meetings in one day on the busiest day on the Hill. We had to meet the senators in their little hideaways because they were in between votes. They sometimes were leaving a vote and coming back to spend time with us, but all meetings were at least a half an hour of these members’ times on one of the busiest days of the year and during one of the busiest seasons.

It’s a testament to when you bring these groups together and you say, ‘Hey, I have the diving industry and the RV industry and the boating industry and the biking industry in town, and they all want to meet with you. And we all have a couple of key agenda items that we agree on.’ And no one even questioned whether this should be a member-level meeting. Everyone saw us that we requested meetings with. That’s just a huge testament to this group and the growing importance of collaboration in the outdoor recreation sector. 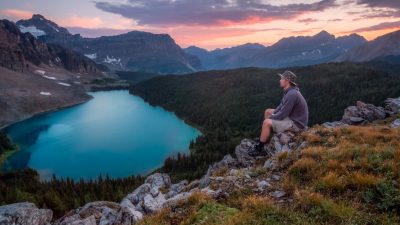 RVB: How would you recap the year from a federal legislative perspective?

Wahl: We ended the year with eight recreation hearings. That’s a record. We’ve had years where there have been no hearings on recreation, or we are part of another hearing, or maybe there’s a recreation witness in a hearing on wildlife or a hearing on energy. But we had eight recreation hearings in the House and the Senate, and we ended the year really strong on getting two priority legislations — the Land and Water Conservation Fund and the Restore Our Parks Act — out of the House and the Senate.

Similarly, we had other bills, like Recreation Not Red Tape, get hearings in both chambers. We also had a small business committee hearing dedicated just to issues in the outdoor recreation space. That’s pretty noteworthy because that’s a whole committee that’s not in our jurisdiction and one we usually don’t work with.

I do think that is all because of these groups coming together this year and what’s been built over the past couple of years. It’s not a coincidence that we had probably the most impactful year on the Hill with hearings, with some of them being educational and some of them based on legislation. It’s important for us having, through ORR, a collaborative place to educate members and then, through our members like RVIA and RVDA, a place where they can advocate for legislation.

RVB: So, let’s talk about campground modernization. There was a report originating from the Recreation Advisory Council (RAC) — which has since been disbanded — that recommended the National Park Service (NPS) privatize campgrounds within national parks, limit benefits for senior visitors and allow food trucks as a way to bring more money into the system. That report was widely criticized by certain media and national park supporters. But the RAC and its report don’t have anything to do with ORR or your group’s campground modernization initiative, correct?

Wahl: Correct. We’re not on the RAC and we’re not involved directly in that. We are involved in the effort that’s been underway with the National Park Service (NPS) for about a year now — one that RVIA and RVDA are very interested in and one that I’ve had conversations around — which is separate from the RAC proposal.

It’s very important that the infrastructure is looked at and the National Park Service is getting an inventory of what the status of the campgrounds are, especially if we’re to get some money from the Restore Our Parks Act. We need to know what the priorities are. So, this campground initiative has been going on and will continue to go on.

The problem has really been the negative rhetoric around the RAC proposal, which the media took in a different direction. It seems like it’s been hyperbolized a little bit from what the actual proposal was. But I think with RAC discontinuing, our hope is that the work that was started separately from RAC on campground inventory and the look at campground infrastructure will continue. That’s really important to all sectors. That’s important to people who want to camp in the back country in a tent, and that’s important to people who want to be in an RV and have access up to standard and modernized infrastructure and Wi-Fi and things like that.

Wahl: The opportunity for us — and we talked about this at the board meeting — really is that there are important campground infrastructure changes and inventory that have to be done. We don’t want the negative press around privatization, which no one wants. We don’t want that to take over the positive opportunity to know what shape our campgrounds are in, and bring partners to the table to get them up to the shape that visitors want. Sometimes visitors in a front-country area want a lot of different things than a back-country area.

There’s also a great opportunity for the private campground industry. If the national park says, ‘Hey, this isn’t the right place for Wi-Fi and RV pull-outs and rentals and kayaks,’ then there’s the private campground industry might say, ‘Well, right outside of the park is a good place for this, or right outside of the forest.’

It’s not about selling off public lands. That’s 100% not something ORR would ever be for.