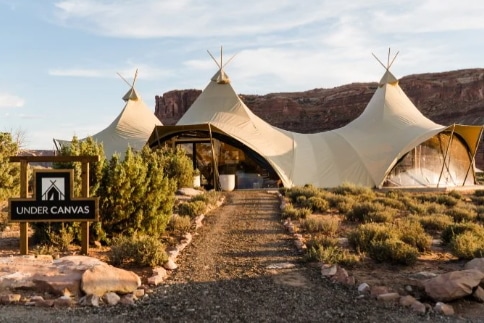 Under Canvas has recently opened a new site in Utah.

There has never been a better time to upgrade a southern Utah road trip. Along Route 89, after the crowds of Lake Powell give way to the quiet gravity of Grand Staircase–Escalante National Monument, there’s a stretch of highway flanked by stacked sandstone formations. They seem impenetrable at first, but a series of pull-offs suggest other­wise. Many of the roads lead to dispersed campsites. Others lead to some stunning new tented lodging, according to Outside Magazine.

The latest outpost is from glamping operator Under Canvas. The company, known for finding picture-perfect locales near national parks, has outdone itself with this one, which opens in April (from $299). Perched on a canyon-rim plateau, with views of the adjacent monument and Lake Powell’s azure waters, the camp’s 50 safari-style tents are spread across 220 acres. There’s yoga, hiking, and paddleboarding, tours of the lake by raft or kayak, and other adventures.

For an over-the-top, bucket-list splurge, head five miles south to Camp Sarika, a new offshoot of nearby resort Amangiri, which has come to epitomize desert luxury since opening in 2009. With the launch of Camp Sarika last summer, guests have the option of staying in one of ten canvas-clad pavilions that include a living room and one or two bedrooms and open onto a sprawling deck, plunge pool, and fire pit (from $3,500).

With 600 acres of grand mesas, sandstone formations, and slot canyons, the property feels less like a hotel and more like a personal playground. From horseback riding atop ridges to yoga sessions in natural rock amphitheaters to a guided via ferrata hike up steep faces and across chasms, there’s plenty to do without venturing far.