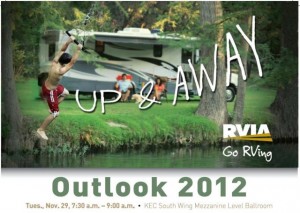 The RV industry unveiled its new Go RVing “AWAY” national advertising campaign during “Outlook 2012: Up & Away” program that kicked off the 49th annual National RV Trade Show Tuesday (Nov. 29) in Louisville, Ky.

The event was hosted by Gregg Fore, chairman of the Recreation Vehicle Industry Association (RVIA), and included a presentation about the industry’s outlook for 2012 by RVIA President Richard Coon, according to a news release.

In a presentation titled “What’s Up!” Coon told attendees that the industry is poised for long-term growth despite recent economic challenges. “RV ownership is at its highest peak ever, and future purchase intentions are strong,” he said. “This illustrates the continued demand and enduring appeal of RV ownership.”

Secretary Salazar highlighted the economic impact generated by outdoor recreation in the United States — including opportunities at parks and other scenic and historic places — and encouraged Americans to take part in growing local economies and creating jobs through tourism, travel and connecting with America’s great outdoors.

“RV’s play a special role in providing Americans a time-honored way of reaching their camping, fishing, hunting and other recreation destinations,” Secretary Salazar said. “And, as a virtually 100% American industry, the RV industry plays a key role in our nation’s economy, employing tens of thousands of men and women right here at home.”

“Even during this time of economic and social upheaval, RVIA public relations has found success because our industry has many strengths,” Thompson told the audience. “We have great products that offer enriching experiences with enduring value and strong consumer appeal.”

Olson said the Go RVing campaign has been a bright spot despite the murky business atmosphere.

“The growth of the RV ownership rate in Go RVing’s target market has been impressive, especially considering the destructive force of the Great Recession,” Olson said. “To stay on track, we’ve kept on message: the RV lifestyle frees you to pursue your passions more easily, more often and more affordably with those who matter most.”

Ashurst announced a new promotional partnership between Go RVing and the Great American Country television network that taps into the strong affinity RVers have for country music.

“Starting in March, Go RVing and GAC will co-sponsor a sweepstakes to win an RV and tickets to the Country Music Association’s famed Music Festival – the ultimate country music fan experience,” Ashurst said. “This will be promoted on air and online with a custom vignette featuring a country music star’s concert tour across the U.S.”

Stinnett told the gathering about Go RVing’s Leads-Plus program that allows industry members to follow up on leads more efficiently and effectively by ranking them by likelihood to purchase.

“Dealers, manufacturers and campground representatives all helped create this program and make it user-friendly,” Stinnett said. “At a time when staff and resources are limited, it’s a big plus for our dealer-tie-in program.”

The program culminated with Stan Richards, founder and creative principal of the Richards Group, unveiling the new Go RVing “AWAY” national advertising campaign.

“The new campaign for Go RVing is built around one simple word: ‘Away’,” Richards said. “But in this campaign, ‘Away’ becomes much more than just a word. It’s a place. It’s a state of mind. It’s out there somewhere, and it’s different for everyone, depending on who you are or what you like to do. And traveling in an RV is the best way to find it.”

“It’s a very well done campaign that captures the essence of the RV experience. These ads are very motivating and will drive RV purchase intent,” said Russell Chick, vice president of marketing for Spartan Motors.

“The new campaign is great! It should help those who are thinking about RV camping to actually give it a try,” said Jessica Claiborne of Freedom RV Rentals in Ashland, Va. “I always tell people to go to GoRVing.com to find out anything they want to know about RV travel.”