Owners of KOA’s ‘Park of the Year’ Credit Perseverance 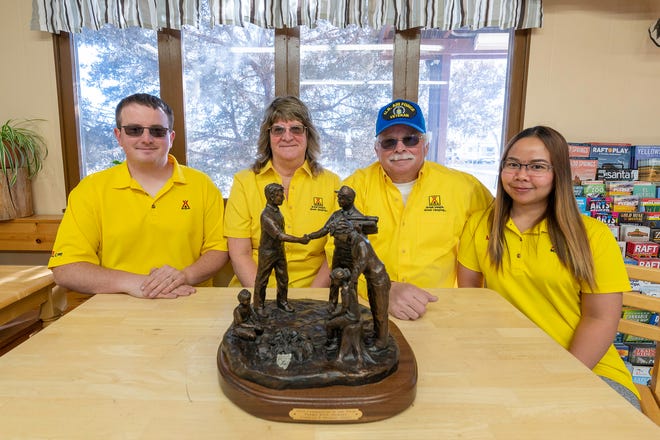 From left, Richard Stowe, Carolyn Stowe, Michael Stowe, and Maria Stowe pose with their 2021 Campground of the Year award.

After some slim years as campground owners, one Pueblo, Colo., family has proven that perseverance pays off, and have a pretty cool bronze statute and bragging rights as North American’s best campground to prove it, according to The Pueblo Chieftan.

Pueblo KOA Journey Owners Carolyn and Michael Stowe have been awarded the 2021 Kampgrounds of America (KOA) Campground of the Year honor. The award is bestowed annually to one of the 525 KOA campgrounds in the United States and Canada.

For the Stowes, who own the KOA at 4131 N. Interstate 25 at exit 108, it all started with a desire to escape the 10 months of winter in Northern Vermont where Carolyn Stowe worked as a small business administrator and Michael, an Air Force veteran, also worked for a business.

“We wanted our own business in the camping industry and wanted to work for ourselves. We have always been big campers and talk about what we like and didn’t like and what we would do differently at the campgrounds we visited,” she said.

After taking a class about how to buy a campground, what to look for and how to negotiate, the Stowes decided to buy the Pueblo KOA in 2004. Some of their friends and family — including Carolyn Stowe’s own mother — thought they were crazy to leave their steady, paying jobs and beautiful log home in the Vermont woods.

At the time, their sons Richard and Killian were ages 9 and 12. They might as well have landed on the moon.

They went from 300 cloudy, rainy, snowy days a year to 300 sunny days a year. The culture was a completely different ball of wax too.

“We had some pretty slim years, but it has been great for us. It (success) is so overwhelming because of those lean years,” said Carolyn Stowe. “It is perseverance.”

That perseverance came in the form of constantly asking customers what improvements they would like to see. Along the way, they added camping cabins, patio sites, water features, a new septic system, laundry, a jumping pad and remodeled the aging A-frame building.