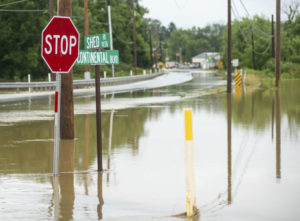 Campgrounds along Pennsylvania’s Susquehanna River ordered the evacuation of campers and their gear as the river approaches its expected crest Thursday (July 26), according to the Daily Item.

Officials at Nikomahs Campground outside of Sunbury called for the mandatory evacuation of all individuals and their campers and RVs as soon as possible due to expected high water levels. According to their Facebook page, campers were relocated to the parking lot along Fourth Street in Sunbury, behind Dunkin’ Donuts.

Forrest Curran, president of Nikomahs Campground, hoped to have everyone off site by the end of the day Tuesday.

“The lower part of the camp gets flooded at 19 feet, the upper part gets it at 23 feet,” Curran said. “It hurts the season. When you’re camping on the river, you have to deal with Mother Nature. She’s not always kind.”

According to the National Weather Service’s Advanced Hydrologic Prediction Service, the Susquehanna River is expected to crest at 24.2 feet in Sunbury on Thursday afternoon.

Ross Mullin arrived at Nikomahs from Pottsville around 11 a.m. Tuesday to move his camper. He said it took him nearly an hour and a half to get ready to move, but didn’t mind the inconvenience.

“What’s there to be nervous about? It only happens a few times in a lifetime,” he said. “Will the water come up this high? I doubt it. As long as weather permits, we’ll be back.”