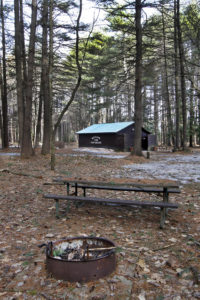 Wheelock Park Campground in Keene was built in 1959 when a group of local volunteers formed Monadnock Chapter 66 of the North American Family Campers Association. The building in the background houses restrooms and showers.

The Keene (N.H.) City Council’s municipal services, facilities and infrastructure committee recommended Wednesday (April 25) that Wheelock Park Campground be closed to the general public for the 2018 season and reopened on a case-by-case basis for select tournaments.

“My two cents is that we can keep it open for the determined people,” Councilor Gary P. Lamoureux, a member of the committee, said. “However, it’s closed to the public until we’re able to get city staff to come forward and give us an idea of what they want to do with this property in the future.”

The committee’s recommendation — which will now be considered by the full City Council — was one of several options presented by city Parks, Recreation and Facilities Director Andrew S. Bohannon at the committee’s last meeting April 11. The alternatives ranged from reducing the number of sites to closing the campground altogether.

Shortly before Wednesday’s meeting, Bohannon led committee members on a brief tour around the campground, pointing out various deficiencies and features in need of repair, from leaky roofs to faulty fire grates.

At the meeting, Lamoureux said the tour had made him concerned about the poor condition of the red pine trees that provide shade for much of the campground. Lamoureux said the trees present a safety hazard, a sentiment echoed by Councilor Stephen L. Hooper, another member of the committee.

“I certainly wouldn’t want to have folks in there all the time with that situation,” Hooper said. “They look pretty bad.”

Bohannon said the parks department would work with individual organizations to plan tournaments and prepare the campground for those events, a notion committee members supported.