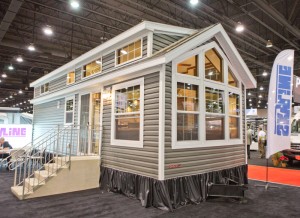 A perceptible change was afoot Nov. 27-29 at the Recreation Vehicle Industry Association’s (RVIA) 50th Annual National RV Trade Show at the Kentucky Exposition Center in Louisville, Ky.: The prevalence of park models set up among the sprawling 730,000 square feet of traditional motorized and towable RV’s.

Not since the mid-1990s when they parted company with RVIA had the park trailer manufacturers been such a serious factor as Louisville Show exhibitors. Now that their Georgia-based Recreational Park Trailer Industry Association (RPTIA) has been shelved and they’ve been welcomed back as RVIA members along with the rest of the U.S. recreational vehicle industry, a total of 10 park trailer builders were displaying 2013 product at the Kentucky Exposition Center (KEC).

“The feeling was very positive. It goes to the whole notion they are part of the overall RVIA family again,” said Matt Wald, the RVIA’s recreational park trailer executive director. “Both psychologically and from the traffic flow, they felt it was a good deal for them.”

RVIA created a new membership category in July for park trailer builders, and, by year’s end, 18 manufacturers representing about 95% of annual park trailer production had joined the Reston, Va.-based trade association, with two other applications pending at press time. “We had anticipated having 15 members,” said Wald. “We have exceeded our expectations. Everybody is happy about that.”

All but two of the new members were affiliated with RPTIA, which still exists in name only. “A couple of OEMs are still not in the RVIA family, but we would love to have them aboard,” said Wald, noting that there’s a new page on the association’s www.rvia.org website pertaining to park trailers with a link to annual shipment figures and other information. “Some are waiting to see if this ‘marriage’ works before investing in it. We think it is a value proposition they can’t stay away from.”

Skyline’s display was as prominent as any at the 2012 Louisville Show. In fact, Skyline, headquartered in Elkhart, Ind., has opted to resume park model production at its manufactured housing plants in Wisconsin and Oregon based on the dealer response to its Louisville Show park model exhibit, reports Mike Scheid, division general manager of Skyline’s Leola, Pa., plant.

Skyline showed a Shore Park-brand unit built in a manufactured housing plant and using a host of manufactured housing componentry like residential-style drywall, said Scheid, adding that his plant picked up eight to 10 new dealers at Louisville and business looks to be up 25% to 35% again this year. Skyline’s Canadian business also is growing.

The Elkhart-based Forest River Park Model Division showed three new park model floorplans at Louisville. Even though the company’s display was in “an obscure corner of the northwest wing,” dealers came to buy. “Our product changes were well received,” reports account representative Gary Duncan. “Dealers came with a purpose.”

Forest River has targeted its marketing toward campgrounds, a hospitality arena that Wald calls “one of the hottest growth areas” for park models because of the fact that so many campgrounds are buying and leasing these units – many of them with rustic aesthetics — to first-time campers and others without RVs in what amounts to a burgeoning “cabin” style of accommodation.