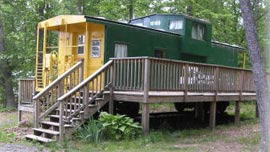 One of the converted caboose cabins at Heavenly Acres Campground.

A campground in Greene County offers cabins, tents, and RV sites, and, also, a piece of America’s past, WCAV-TV, Charlottesville, Va., reported.

Husband and wife Gary and Jan Schneider have been running Heavenly Acres Campground near Stanardsville (north of Charlottesville) for 16 years.

“The best part is meeting people from all over the place,” said Jan Schneider. She said Heavenly Acres can draw people from other countries to “come and check out our beautiful Virginia.”

“We just like it,” said John Myers, a patron of Heavenly Acres for at least five years. “We like the woods. We like the way the campgrounds [are] kept. And interesting that all this railroad memorabilia is around.”

“The cabooses. At first I was very resistant to that idea,” said Jan Schneider. She said when she and Gary were starting out she wasn’t sure it was a good investment. “But it worked out.”

“You know, it’s unusual,” Myers remarked about the Schneiders’ cabooses.

Gary Schneider said the whole idea started because he had been getting a lot of calls for cabins with bathrooms. He read about a campground in South Carolina with a caboose.

After researching, he found cabooses have a primitive bathroom and a way to install a floorplan and bathroom.

Gary Schneider said when he finds cabooses they are usually “pretty rough looking.” Among other renovations, Schneider takes out seats, desks, the oil stove. He replaces the windows and water lines and installs new electricity and walls.

As he walked through his last unfinished caboose, he pointed out remaining projects. “We’re gonna have a walk-in shower. Gonna do some tile work in here. I’m gonna have the bunk beds up here again. The single beds up on the top…Before you even start it’s a lot of work, just looking at them!”

“Working with my husband has been a challenge,” Jan Schneider. She laughed and added, “It’s been good, it’s been good.”

Gary Schneider bought his first two cabooses at the same time from Illinois. He trucked in his last from West Virginia. He and his daughter rode it for its last rail voyage before bringing it to Greene. His last purchase was a red wooden caboose from Pennsylvania. It was in use as a Sunday school classroom.

“The cabooses are a little more unique. They don’t use them anymore so most of them are heading to scrapyards … [It] is where the conductor did his business. He had his paperwork in there. His job was to keep track of all the other cars. One of the reasons the trains got rid of them is they weren’t generating any money. You couldn’t keep freight in them and you couldn’t keep passengers in them, so I think that’s the main reason they kind of phased them out.”

“A lot of railroad families out there,” he said.

“I used to play down by the railroad tracks and the switching yards and it’s a lot of good memories,” said Myers.

Gary Schneider says it takes about a year to renovate a caboose. He is working on his fourth and final caboose. He said when he completes the work, he is finished acquiring cabooses.

“Cabooses are definitely an era gone by,” said Jan Schneider. “Even though we have trains today, it’s not like it used to be … So, it’s kind of, kind of nice to have that.”

“Everybody needs to get away, and the campground’s been an affordable way to do it…I’m glad I was a part of it, where people could come and enjoy it and relax and get away from their problems.”