By: Jeff Crider|Published on: May 20, 2021|Categories: Industry News| 0 comments 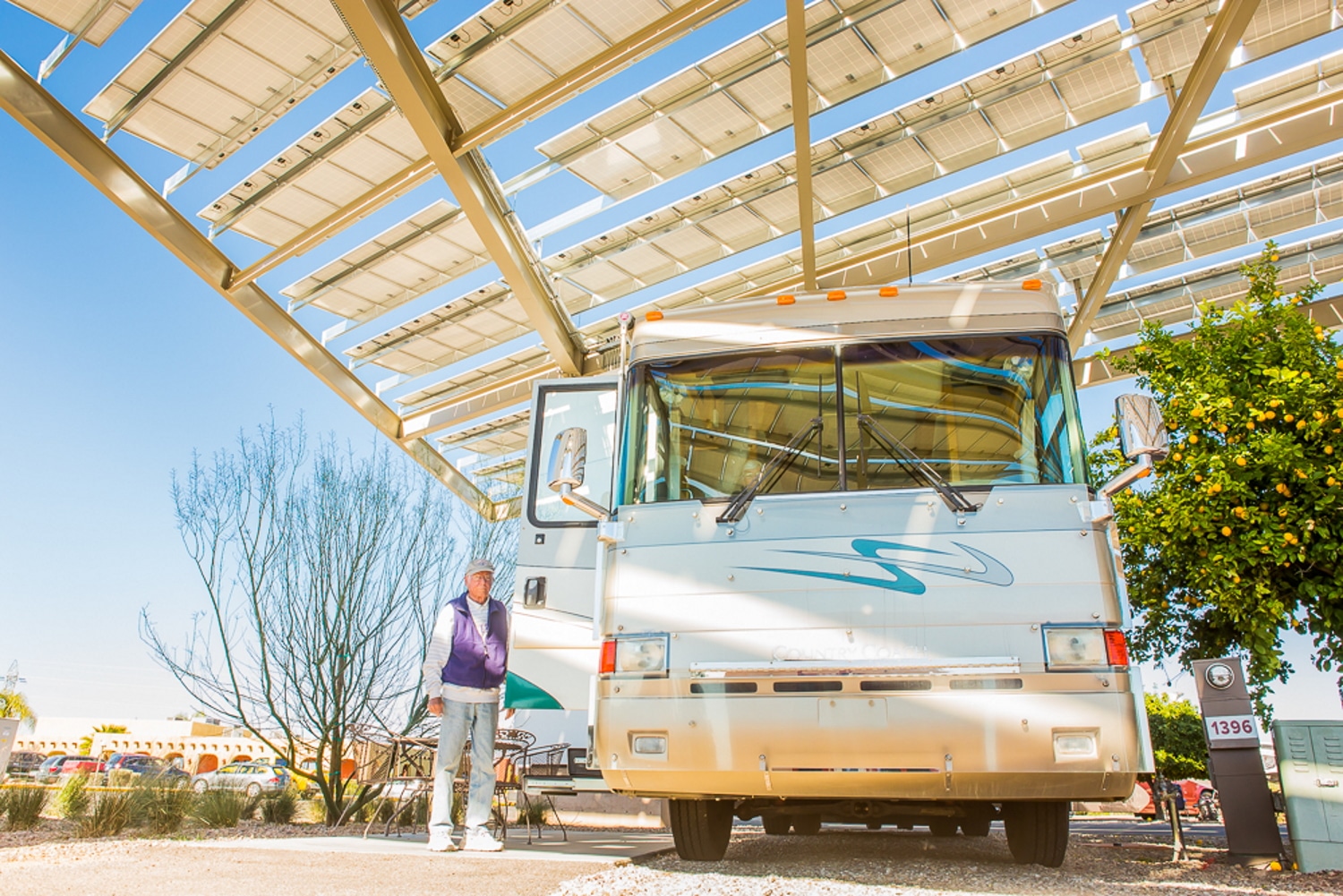 Solar panels provide power and shade at the Tucson/Lazydays KOA.

Over the past decade, growing numbers of private park operators have invested in solar power to cut their electricity bills while increasing their market appeal to environmentally conscious camping enthusiasts.

But as energy costs and concerns about the health of our planet continue to increase, the merits of investing in solar power are not only catching the attention of independently owned campgrounds and RV parks, but publicly traded companies like Sun Communities Inc.

In California alone, Sun Communities has recently invested $24 million in solar power generating facilities that are being installed at three RV resorts and 16 manufactured home communities.

The Southfield, Mich.-based company also recently hired two energy and resource management analysts, both with master’s degrees in sustainability, as the company steps up its efforts to use non-polluting, renewable energy at its RV resorts and manufactured home communities across the country.

Like many other campground and RV resort operators, Sun Communities is finding that investments in solar power not only save money, but make the company more attractive to investors who are increasingly looking to invest in green businesses.

In fact, investment firms are increasingly assessing each company’s Environmental, Social and Governance (ESG) ratings before deciding where to invest their clients’ money.

“These funds will only invest in certain companies that have a certain ESG score,” said Michael Ivey, Sun Communities’ vice president of strategic sourcing. “They’ll say, ‘For our fund to invest in your company, take the necessary and important steps to increase sustainability efforts.”

Ivey tells WOODALLSCM.com (WCM) that having a high ESG score is not only good for the environment, but a great indicator for investors because investments in solar power and other green initiatives saves companies a lot of money while improving their market appeal to consumers and investors alike.

“It saves money and makes the planet a better place,” Ivey said.

Sun Communities parks in California that have made significant investments in solar power include 49er Village RV Resort in Plymouth, in the Sierra Nevada foothills, and two parks in the Paso Robles wine country area, including Wine Country RV Resort and The Vines RV Resort.

While Sun Communities has initiated its solar power investments in California, the company is also exploring opportunities to invest in solar power at its parks in Arizona and other states across the country.

“We started in California because they have high electricity rates coupled with the best incentives,” Ivey said. “There are other states that are not as good (for incentives), but they’re not far behind. Arizona is one.”

Sun is also exploring the idea of investing in battery storage that can store electricity produced by solar panels so that it can be used during peak hours, reducing electric expenses.

The company is also studying the feasibility of investing in Nex-Gen technology, which uses a combination of solar power, battery storage, and natural gas to produce cost-effective power.

“A lot of our portfolio is in the state of Florida,” Ivey said, noting that the company has about 40 RV resorts and 90 manufactured home communities in the Sunshine State. “If we can create energy that reduces our costs and is also sustainable and resilient, that’s something that will be very attractive to us.” 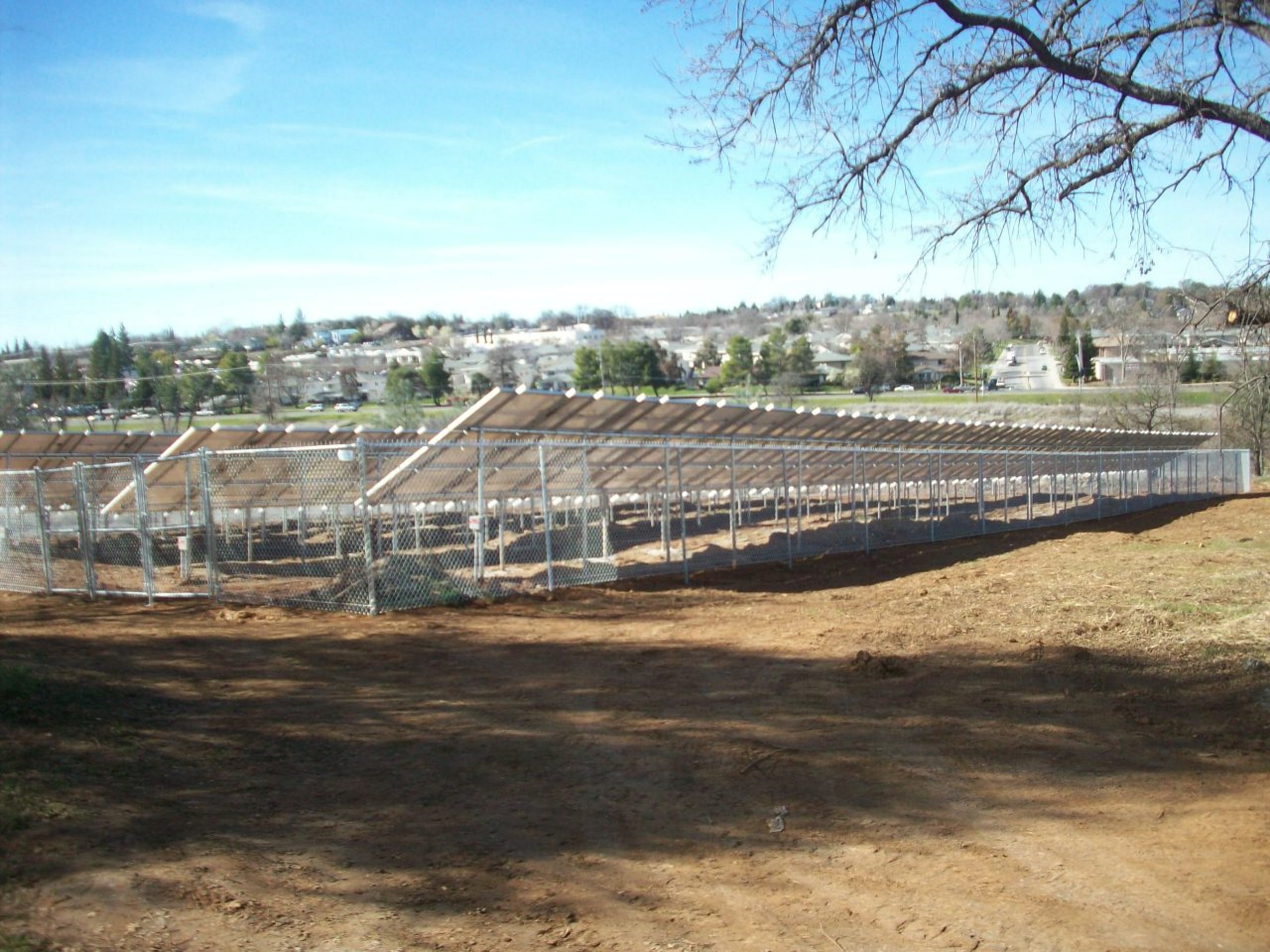 Indeed, Sun Communities is also studying the extent to which Nex-Gen generators and batteries could be used to provide backup sources of power when existing power supplies are disrupted by hurricanes or tropical storms, he said.

Of course, Sun Communities isn’t only looking to expand its investments in solar power, but to invest in other products that can help the company reduce its consumption of natural resources. The company recently spent over $9 million to retrofit all of its outdated lighting with energy-saving LED lights, which consume far less electricity.

“LED lights reduce electricity usage and save kilowatt-hours,” Ivey said, adding that the analysts who track Sun Communities’ earnings increasingly query the company about its investments in money-saving green initiatives.

“On our calls with investment analysts, we get questions now on our sustainability investments,” Ivey said.

Sun Communities is not only applying a green approach to RV resorts and manufactured home communities, but to marinas as well.

Just last September, Sun Communities acquired company acquired Safe Harbor Marinas LLC, the largest and most diversified marina owner and operator in the United States. It owns and operates 101 marinas, manages five marinas on behalf of third parties and has an approximate 40,000-member network of boat owners across 22 states.

“It is early, but there is interest in translating our ESG programs into the marina world as well,” Ivey said.

The National Association of RV Parks and Campgrounds (ARVC), for its part, encourages park operators to invest in solar power and other green initiatives with its “Plan it Green” Award, which is given to parks that best exemplify green practices using a variety of criteria, including the use of renewable energy sources; low voltage lighting; energy-saving appliances; water-saving faucets, toilets and showerheads; as well as environmentally friendly cleaning products.

Solar Helps Owners Save Big in Some Areas

While the pace of campground and RV park investments in solar power often reflects the local cost of electricity, private park operators also find it easier to invest in solar technology if they have knowledgeable experts to guide them.

Santa Ana, Calif.-based Shorebreak Energy Solutions is one such company that is leading the charge to provide solar panels in RV parks and manufactured communities in California.

Boardman added that many park operators are discovering that they can charge more for RV storage if they build solar canopies that provide shade for the RVs. “Shade is valuable,” he said, adding that RV park operators can charge twice as much for RV storage if they provide shade in their storage area. Tax credits are also available to encourage investments in solar power.

Grant, for his part, said he has been pleased with his investments in solar power at Auburn Gold Country RV Park in Auburn, which includes a 105-kilowatt ground-mounted system and a 100-kilowatt carport system in the RV storage area.

“My two (solar) systems cost approximately $1 million with $300,000 in tax credits and then depreciating the other $700,000. So, call it a $400,000 cost after-tax benefits,” Grant said. “The system produces approximately $90,000 per year in electrical generation for a return over 20%. For the solar cover over the RV storage area, customers will pay double the price for covered storage in the shade instead of open storage in the sun and that is another return on investment for solar.”

“As a commercial real estate broker, there is no other improvement you can do to your property that will generate such a great return, and you are going green,” he added.

Snowbirds at the Tucson/Lazydays KOA Resort in Tucson, Ariz. have a new amenity to enjoy this winter: A 558-foot-long by 60-foot-wide canopy that shades 15 campsites while generating clean solar energy.

KOA, in fact, was the first campground company to install the patented “PowerParasols,” which are manufactured by Chandler, Ariz.-based Strategic Solar Energy LLC.

But while the first two “PowerParasols” came with a hefty price tag of $4.2 million, they not only slashed the campground’s energy costs but significantly increased the Tucson/Lazydays KOA’s camper nights in summer, when the park was typically deserted.

“The big benefit to us, besides power generation, is that these ‘PowerParasols’ made the Tucson/Lazydays KOA a place where people were willing to camp in the summertime,” Gothberg said. “These things have been so successful that our business has grown because of it. We have 30 sites that generate revenue all summer that weren’t generating revenue before.” 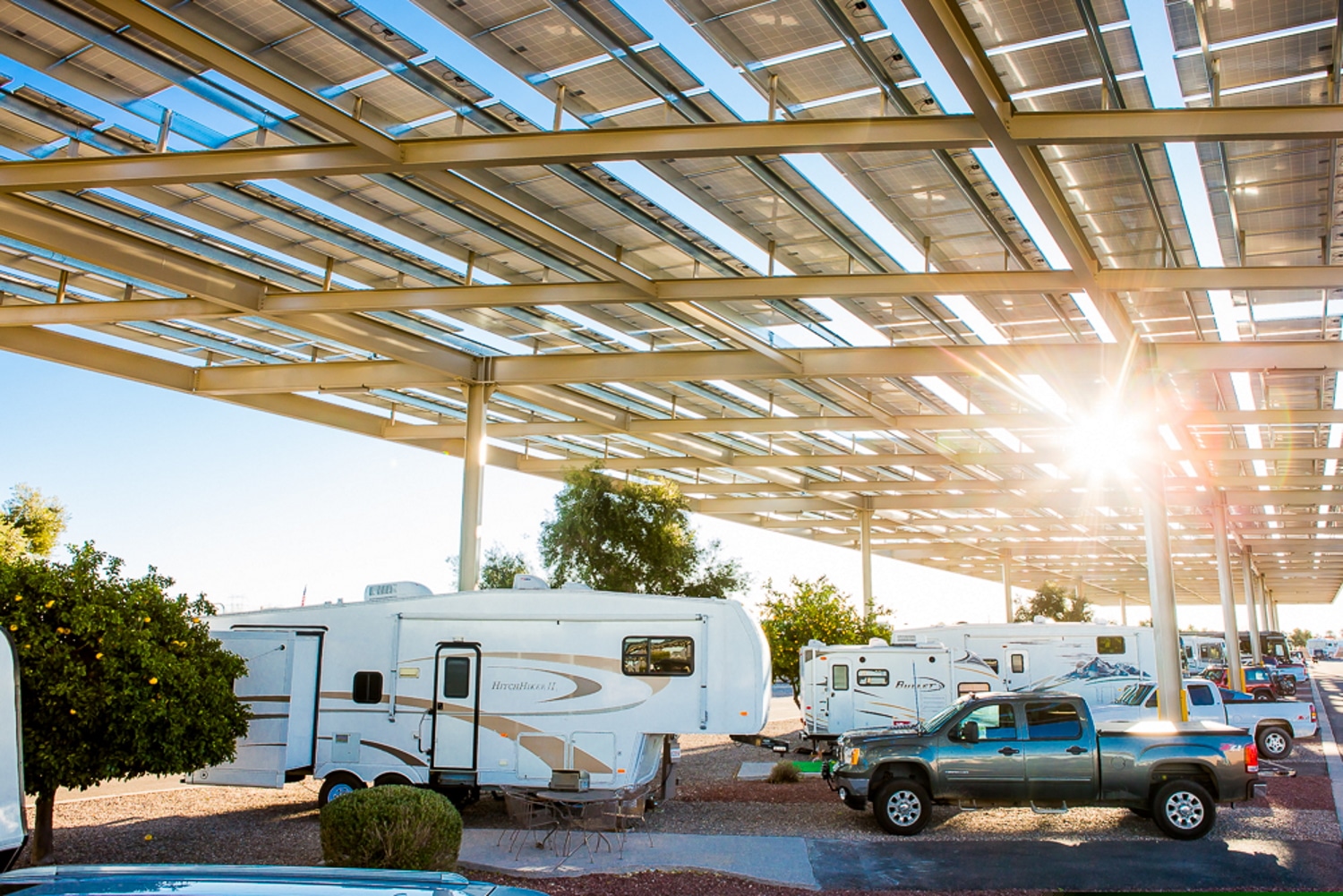 The Tuscon/Lazydays Kamgrounds of America (KOA) Resort has seen an increase in camper nights due to the shade that the panels create, while also realizing large cost savings in energy creation.

That number will increase to 45 campsites — or roughly 12% of the park’s 390 campsites — with the recent completion of the Tucson/Lazydays KOA’s third “PowerParasol.”

But while it’s understandable that solar canopies would be popular in summer, Gothberg tells WCM that they are also very popular with snowbirds, which is precisely why KOA decided to spend $1.7 million to install another “PowerParasol” in time for the 2020-2021 snowbird season.

The structures, which are 28 to 30 feet above the ground, have openings that allow about 30% of the sun’s rays to filter through. This creates an environment with filtered natural light that is not only attractive to the park’s snowbirds but to the park’s citrus trees, which produce significantly more fruit in the shade of the “PowerParasols” than they do in direct sunlight. The additional fruit is an added amenity for the park’s winter guests, who are allowed to pick the fruit they wish to consume.

“When the snowbirds come down, the shaded sites are where they want to be, even in winter,” Gothberg said.

KOA, for its part, is reaping financial rewards for its investments in “PowerParasols.”

The three “PowerParasols,” which collectively produce about 2,253,650 kilowatt-hours annually, also enable the Tucson/Lazydays KOA to cover more than 85% to 90% of its electricity needs on a year-round basis, thereby eliminating approximately $330,000 in annual electricity costs.

Federal tax incentives also make such investments in solar power worthwhile. KOA estimates that it will recoup its investments in each “PowerParasol” in about eight years.

Beyond the financial benefits of investing in “PowerParasols,” Gothberg said the use of green technology appeals to consumers who increasingly want to support green businesses.

“We did a tracking of savings for the first two and a half years of the Florida company-owned properties and the payback for all three came in at the under three-year payback target,” Mulvaney said, noting that the study was completed “seven to eight” years ago.

At the KOA franchise level, the biggest recent solar panel installation took place two years ago at the Bellefonte/State College KOA Holiday in State College, Penn., which installed 576 solar panels and 24 inverters — enough to generate 246,357 kilowatt-hours of power, easily covering all of the park’s energy needs.

The 50-year-old, family-owned park, located in a rural area at the base of the Appalachian Mountains, was built in 1969 by Erwin Saulsbury, the father of the current owner, Barb Saulsburg, and her husband, Rick, who acquired the park in 1985.

While Barb and Rick had been interested in the idea of installing solar panels for many years, they decided to move forward with the idea after attending an agricultural show where they learned about the availability of sizable grants for rural small businesses that install solar systems.

In addition to eliminating its electrical costs, the solar system also generates green energy credits, which the park can sell on the open market to companies that generate pollution. The credits typically sell for $40 each, which could generate another $8,000 in income for the park each year, Gast said, adding that it will take about seven years for the Bellefonte/State College KOA to recover its solar installation costs.