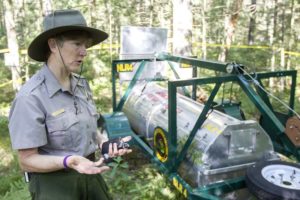 Some campers at Michigan’s Sleeping Bear Dunes National Lakeshore in late July found themselves in the presence of a scavenging black bear, according to the Record-Eagle.

A single bear has repeatedly been spotted throughout July at Platte River Campground within the national park in Benzie County, much to the surprise of campers. Some even found the bear’s snout poking inside their tents in search of an easy meal.

The flurry of the bear’s activities in the campground spurred park officials to attempt to capture and relocate the creature, while also warning visitors about its presence and how to store food and trash in a way not to attract it.

“We are very fortunate the bear is not yet food aggressive,” said Sue Jennings, a biologist and wildlife program manager at the national park. “We are really concerned about wanting to get it trapped.”

“We are getting a lot of questions,” Jennings said, adding how the now quite visible trap raises awareness and led to improved food storage among campers.

So far, the bear has successfully scavenged through the campground, finding food left out and rummaging through easy-to-reach trash. That means the bear has been conditioned to find food near people and it seems to return every five to seven days for a repeat feast.