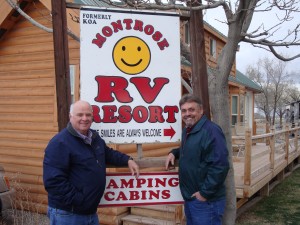 Jeff Sims has about as much experience as anyone can get in the campground business.

He was 10 years old when his father, Dean, co-founded the Missouri Campground Owners Association. He worked in the campground business growing up and co-owned and operated Compton Ridge Campgrounds, Lodge & Convention Center in Branson, Mo., from 1967 to 2007. He also served as chairman of ARVC from 1997 to 1999 and served on the ARVC Foundation board.

But while private parks have withstood the economic downturn much better than other segments of the travel and tourism business, Sims said the industry would be stronger if more campgrounds were members of ARVC and its state affiliates, according to a news release.

“When you boil it down,” he said, “it’s about numbers. The more people you have as members, the better able you are to take advantage of opportunities. But when you have no budget, you can’t. In fact, you can’t have effective outreach, public relations, government affairs or discounts if you don’t have enough members.”

So what’s keeping campgrounds from joining ARVC and its state affiliates?

“It’s about education,” Sims said. “We have to educate our constituency. Educate them about the work ARVC is doing and how it is benefiting the industry.”

And Sims has taken on the task of meeting face to face with park operators across the country to hear their concerns and talk to them about ARVC and the work the association is doing on their behalf.

“The campground industry has been good to me and my family,” Sims said, adding, “I feel like I have an opportunity to give back.”

ARVC President and CEO Linda Profaizer, for her part, sees great value in having Sims working on the association’s behalf.

“We are extremely fortunate that Jeff has the conviction of his beliefs in the value of belonging to ARVC and the state associations,” she said. “He is so particularly well-suited to be on the road talking to park owners and managers about the benefits of associations and to lend an ear to their concerns and their business needs.”

Profaizer said ARVC is working with Sims on a test basis. “If successful,” she said, “we will see how this can be continued and expanded into the future. “