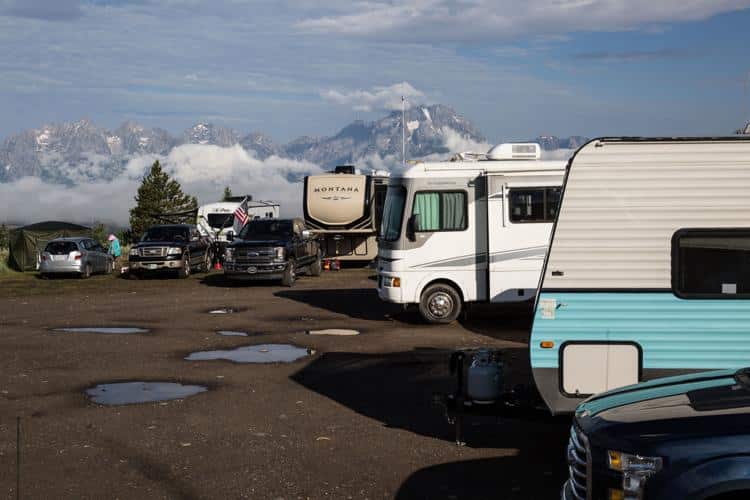 With uninterrupted views of the Teton Range, campers pack together on a bench above the Triangle X Ranch in July 2020, at the Bridger-Teton National Forest’s Toppings Lake dispersed camping area. Traffic counters at Shadow Mountain and this area recorded 300 to 400 vehicles each day, and come 2021 there could be an added wave of visitors from people who didn’t reserve a campsite ahead of time in Grand Teton National Park.

Dozens if not hundreds of daily campers who didn’t book a site at Wyoming’s Grand Teton National Park six months in advance are going to be deflected elsewhere to pitch a tent come summer 2021, according to the Jackson Hole News & Guide.

Those visitors who didn’t plan ahead and reserve a campsite electronically are logically going to look nearby, and what they’re going to find is the Bridger-Teton National Forest.

“I think the effect on us, one thing is that the visitors are going to be calling,” Bridger-Teton wilderness and recreation specialist Linda Merigliano told the News&Guide. “We’re going to be getting a heck of a lot more phone calls. They’ll ask if they can reserve a site on the forest, and we don’t have a reservation system.”

In addition to the answer being no, often the callers will be told there are slim pickings for camping anywhere north of Jackson — especially if they’re ringing later in the day.

“The stuff north of Jackson tends to fill in the height of the summer usually by 9 a.m.,” Merigliano said. “For people who are driving later in the day, it’s better if they stop and choose a campsite before they get to Jackson.”

Depending on where they’re coming from, that means stopping at places like the Hoback or Snake River canyons or the opposite side of Togwotee Pass. When that didn’t happen during the COVID-19-influenced summer of 2020, the outcome frequently was driving through already filled dispersed forest camping zones and campgrounds — and then camping illegally out of desperation. There are only 260 road-accessed and authorized forest campsites north of Jackson on the Bridger-Teton, a number that’s proving inadequate for the demand of the 21st Century.