Part 1: A Look Back at KOA's Early Years

Editor’s Note: This is the first in a series of stories commemorating the 50th anniversary of Kampgrounds of America Inc. that appear in the latest issue of Woodall’s Campground Management.

Dave “Bud” Drum was a visionary. As a well-known fertilizer dealer in Montana with a penchant for ideas, he interested some of his friends in Billings, Mont., in the early 1960s to buy some land on the edge of town to make a quick killing.

U.S. Highway 10, then known as the “Highway of the West,” was going to be replaced by a new interstate and Drum figured if he bought some choice land south of Billings, the federal government would come knocking on his door for a buyout and he could triple his money, according to James Graff, a former marketing officer at Kampgrounds of America Inc. (KOA), the unofficial company historian (and a key contributor to this story).

Unfortunately for Drum and his fellow investors, the new highway went a little bit north of where his land was located, bypassing them completely.

Drum’s fellow investors faded away and Drum was left with this land.

Drum convinced three other Billings investors that his scenic property on the Yellowstone River nevertheless offered considerable profit-making potential. The 1962 World’s Fair was scheduled to be held in Seattle, and Drum anticipated that a significant number of travelers would be passing through Montana on their way to the event and would desire affordable but pleasant accommodations.

Drum decided to enter the outdoor hospitality business instead and turned the barren land into a campground, calling it “The Billings Campground” for lack of anything better to call it. He welcomed his first guests in the summer of 1962. Ray Possley of Illinois stopped in Billings after driving to the Seattle Worlds Fair. His Dodge motorhome was one of the first recreational vehicles to register at the Billings Campground. The campground offered a camp store, hot showers, laundry facilities and electrical hookups for $1.75 a night for a family of four.

The city fathers liked the campground because it meant RVers weren’t parked overnight on Billings’ streets.

Drum’s son operated the campground for his father, as the elder Drum was busy during the day with his fertilizer business. But at night, Drum would come out and talk with his guests, some of whom were on their way to or from the World’s Fair. Billings, the biggest city in Montana, is conveniently located midway between the Midwest and the West Coast. 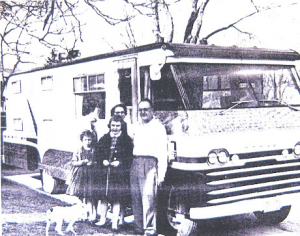 Ray Poselly and his family of Mendotta, Ill., pose at The Billings Campground in Billings, Mont., during the summer of 1962. The family was one of the first campers at what became the first KOA campground.

That first season was a successful one, and new business peeked the curiosity of John Wallace, who supplied LP gas to Drum’s campground.

Wallace asked for the list of campers who had stayed at the campground that summer and concocted a 22-question survey that he sent out over the winter to 500 customers.

Wallace expected a 10 percent return and was shocked when he got 50 percent of them back. Moreover, more than 90 percent were highly favorable toward the stay they had had at the campground.

It was clear from the survey that travelers liked to stay in campgrounds and that a chain of campgrounds could be successful.

Wallace got back to Drum with the conclusion that he was onto something and asked what he was going to do about it.

“Drum was a dreamer, not a doer,” Graff said. “Wallace had a fulltime job and couldn’t do much about it but urged Drum to get hold of it and get going with it.”

It’s clear that without John Wallace’s urging, “Drum would not have gone ahead with anything more,” Graff maintains.

The group cast about for a name for their endeavor and settled on Campgrounds of America. However, they could not obtain a copyright for this moniker because “Campground” was an everyday word. To circumvent this problem, Drum and his associates opted for the distinctive name “Kampgrounds of America.”

So it was in 1963 that Kampgrounds of America Inc. was formed. A logo was designed, a patent was registered and the first franchise agreement was drawn up. The tepee-shaped KOA logo, designed by Karlo Fujiwara, was destined to become a highly recognizable brand.

Wallace put down $30,000 at a Billings bank to get the system going. His golfing partner and friend, Bob Boorman, came in as another partner

It also was in 1963 that Drum got in contact with Don Hammond of Pocatello, Idaho, a super salesman, who set up a team of salesmen to begin selling KOA franchises west of the Mississippi River.

The first franchise was sold in 1964 to a lawyer in Cody, Wyo. By the end of the summer of 1964, there were seven KOA franchisees. Drum organized KOA’s first franchise convention in 1964 at the Rimrock Lodge in Billings.

Wallace also was responsible for the unique A-frame design of the KOA campground offices. The first was built at the Boise Cascade plant in Pocatello. That A-frame structure was shipped out with the front half payment of every franchisee that signed on.

In 1965, KOA formed an owners association, which was first led by Russ Porten of the Miles City, Mont., KOA. That same year, KOA began to sell franchises east of the Mississippi River.

In 1966, Drum realized he needed a professional to manage the operation and hired Darrell Booth, the manager of the Billings Chamber of Commerce, as general manager of KOA in March of that year.

“It made all the difference in the world,” Graff contends. “He brought business knowledge, enthusiasm and was very charismatic.”

The late 1960s under Booth’s watch was a time of rapid growth for KOA. The first national KOA convention was held in Denver in 1966, and the company’s first full-color campground directory was published the following year. Booth expanded the KOA management team, including Graff who joined the marketing staff as a consultant in 1966.

Hammond’s sales staff was bolstered by “a crackerjack salesman” by the name of Dale McCart who sold 77 of the first 100 KOA franchises.

To ensure that KOA’s rapid growth did not compromise the quality of the company’s product, the company insisted that each campground maintain certain standards of cleanliness and service. Each franchise – whether an existing campground that had converted to KOA or a first-time enterprise – was expected to provide basic amenities. Hot showers and sanitary facilities were required of all franchisees. As a result, KOA quickly developed a reputation for offering a consistent level of accommodations. As the Worcester (Mass.) Telegram & Gazette explained, KOA “changed the way a lot of campers, accustomed to roughing it, felt about campgrounds.”

The Billings Gazette noted that in the days of rapid expansion, ranchers would buy a franchise, slap up KOA’s iconic A-frame building on some cropland and open what was nicknamed “dirt motel by the highway.”

Booth’s leadership and foresight allowed Kampgrounds of America to grow and prosper, even during harsh economic times.