Art Peterson in his office at KOA Inc.

Editor’s Note: This is the second in a series of stories about the formation and growth of Kampgrounds of America Inc. (KOA), which is celebrating its 50th anniversary this year.

Unlike Dave Drum or John Wallace, Art Peterson was a camper. He had two sons and would often camp in the family’s 23-foot travel trailer. In an interview with Woodall’s Campground Management, he recalled camping in a KOA campground near his home in Ogden, Utah, and thought he should buy a campground. He quickly learned he couldn’t afford to buy one. He went to work for the company instead.

He joined KOA in 1969 to set up a merchandising and equipment division. There were seven people in marketing but none had retailing experience. Peterson set up manuals and procedures for purchasing with vendors, such as Speed Queen, one of the company’s original vendors.

In one of its first ventures, KOA started a KOA-sis, a play on oasis, for its stay or tow program. Campers could lease a trailer and take it to other campgrounds.

When KOA went public in 1969, the stock sale “raised more money than was anticipated, so the board decided to invest the excess capital in buying more campgrounds,” Peterson explained.

Peterson’s focus switched over to buying and managing company-owned campgrounds and the holdings grew from three to 38.

“Some were profitable, some were not,” Peterson admitted. “The lesson we learned was to stay out of seasonal territories which are better served by franchise operators.”

The year 1971 saw incredible growth for the system: 156 new KOAs were opened that year in the U.S., Canada and Mexico, bringing the total system to 500 campgrounds. In addition, 76 others were under construction at year-end and KOA franchises were granted in 300 other locations.

The 10-year anniversary convention was held in New Orleans in 1972 and 194 KOAs attended.

In the early 1970s, KOA opened its first Mexican RV park in Tepic followed up by parks near Mexico City and elsewhere. Ultimately, all of them failed, primarily because Mexico had no middle class to speak of, Graff recalled. 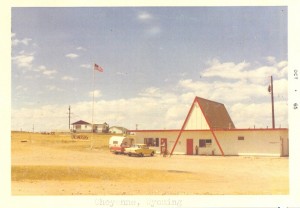 Undated photo of the KOA in Cheyenne, Wyo.

The energy crisis of 1973 to 1975 began to take its toll on KOA and its franchisees as fewer Americans took camping vacations.

“The impact upon travel, and upon KOA, of the energy shortage, especially gasoline, is already clear and it is severe,” Booth wrote to shareholders at the end of 1973.

Peterson switched over to new ventures and oversaw the formation of three new companies before assuming the presidency in 1979 after Booth became ill.

“I would have loved to stay in new ventures but when it came time to refocus, the board chose to replace him with me.”

“Darrell was dynamite. He was an extremely bright man. He was a handsome man. He got along with everyone. He loved to fish, hunt and play golf. He was a man’s man. He was very bright and hard working. He was sometimes short-tempered like smart people tend to be. It was a tragic loss when he passed away. He was one of the most respected businessmen in Montana.”

Booth’s illness was a dark time for KOA in another way. It was during the presidency of Jimmy Carter, when inflation was 12 percent and interest rates were 18 percent, that the KOA system experienced a major implosion. Some 200 of KOA’s nearly 900 franchisees went out of business.

Rising fuel prices in 1979 made RVs look like “they were destined to be dinosaurs,” KOA investor Oscar Tang would remark years later.

“When we came out of that, it was obvious we had survived. Most of the other companies, except for Jellystone, were gone,” Peterson said.

With stock values depressed and business curtailed across the U.S., it didn’t make much sense for KOA to be a publicly held company by the early 1980s, and the board began to work out a plan to return to private ownership. It met with its two largest shareholders, Reich and Tang and worked out an agreement whereby they would buy out all the public shares and take the company private once more. The buyback was accomplished in mid-1981.

“It made sense to everybody,” Peterson recalled. “The sale gave KOA stability because the buyers reinvested the money into the company for future growth. This was a marvelous tool to be able to talk about with potential franchisees.” 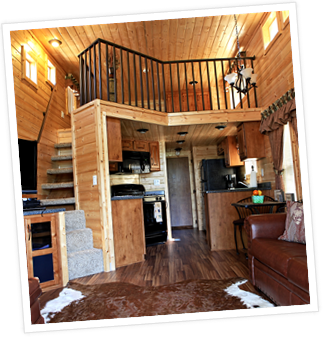 Today’s KOA cabins, like this deluxe cabin with loft, are a testimony to the vision of Art Peterson, who championed the development of cabins while he was KOA president from 1980 to 2000.

Peterson says his greatest satisfaction during his 20 years as CEO was the introduction of camping cabins.

“It was a difficult project to get going,” he conceded. “People are generally content with things if they’re going OK. But looking down the road, it seemed we needed to get into the cabin business. Other than government campgrounds, which had shacks dating back to the CCC days, most campgrounds didn’t have cabins.”

KOA had offered a primitive-style cabin as early as the 1970s, but it didn’t gain any traction. When KOA re-introduced the Kamping Kabin concept in the early 1980s, it took the company some five years promoting the cabin concept at annual conventions and taking their story on the road before it caught on, he said.

KOA opted to install the first cabins at company-owned campgrounds, like in St. Petersburg, Fla., where 30 were built in one year.

KOA entered in a joint venture with a Great Falls, Mont., builder and the idea began to gain traction.

“It got mom off the ground into a place with a door and a lock on it and changed the dynamics of the KOA system,” he said.

Keep in mind that the demographic of the typical camper was changing by the 1990s. Tent camping’s popularity was clearly on the decline as more and more Americans could afford to camp in RVs. In fact, by 1998, about 60 percent of all KOA campers were in RVs. The U.S. was an aging nation as Baby Boomers moved into their 50s.

By 1998, more KOA campers stayed in Kamping Kabins than in the traditional tents, and 90 percent of all KOA campgrounds contained at least one Kabin. That same year, KOA debuted its Kamping Kottages for guests who wanted more luxurious accommodations. The Kottages offered full kitchens, bathrooms and dining areas.

Earlier, in June 1996, the company debuted its first “family adventure ranch” near Butte, Mont. With a roster of activities ranging from horseback riding to cattle drives, this KOA represented a new breed of camping. No longer just an inexpensive method of travel, camping had become an end in itself. As the Worcester Telegram & Gazette explained, “what was once viewed as a rustic blue-jeans and hiking-boots experience has become more sophisticated.”

Nothing Ventured, Nothing Gained

KOA expanded beyond the U.S. border into Canada, Mexico and even Japan.

Under Petersen, KOA branched out into other ventures, domestic and international. KOA had already gone international with its first KOA in Canada as early as 1970 and operated 45 KOAs in that country by 1993, but it had delayed extending the network beyond North America. However, in 1992, it signed a master franchise licensing agreement with a Japanese investor. Several dozen Japanese KOAs were built, but financing problems arose and the KOA footprint waned, then disappeared.

In 1996, the company debuted Acapulco West KOA, the first in a series of KOAs planned for Mexico like KOA did in Canada. Relying on U.S. consumers’ familiarity with its brand, the campground particularly targeted Americans vacationing in Mexico. In 1998, the company also opened Mexican KOAs in Puerto Vallarta and Tecate. The Mexican national who operated the campgrounds envisioned a strong domestic demand, recalled Pat Hittmeier, current KOA president.

“But in the end, we were not successful in driving U.S. business across the border and we couldn’t make the model work,” he said. The plan was scrapped.

In 1998, KOA also launched a new enterprise KOA RV and Boat Storage to cater to RVers who had no place to store their RVs. By March 1999, KOA had opened three boat and RV storage facilities.

Also in 1998, KOA partnered with the Disney Company to promote the entertainment company’s line of Goosebumps audio products. In exchange for selling the Disney audiotapes in its onsite convenience stores, KOA was given the right to use Disney characters on its signage.

Peterson retired in 2000. He now lives in Lakeview, Minn.

Next: The Jim Rogers Era