Editor’s Note: This is the conclusion to a three-part series commemorating the 50th anniversary of Kampgrounds of America Inc. (KOA) that appears in the latest issue of Woodall’s Campground Management.

Late in 1999, Oscar Tang, owner of KOA Holdings Inc., reached out to the hotel and casino industry and hired Jim Rogers, who served as vice president and general manager of Harrah’s Reno, to succeed Peterson, who retired.

Under Rogers, KOA redirected its focus by curtailing international development, leaving the RV storage business and setting plans in motion to increase the number of its affiliated campgrounds.

The changes, according to Rogers, who was interviewed early in 2000 by RVBusiness magazine, should result in a closer relationship with franchise holders and, ultimately, an increase in the number of nights campers stay in KOA campgrounds.

He began to chart a course that KOA follows to this day.

“We are evolving,” Rogers said in that interview. “We are going to retrench on the segment of the business that we want to focus on and grow. We have an opportunity to expand with company-owned campgrounds and franchises. We have some major markets where we would like to establish campgrounds.”

As early as 2000, Rogers said KOA completed marketing surveys in Detroit, Houston and Seattle that “tell us we are very trusted, recognized for our family-oriented reputation.

“Our thinking is about going forward, being more aggressive to take advantage of our reputation,” he said. “Our research has created some focus that will allow us to be more effective in our marketing.”

Under Rogers, KOA has capitalized on its superior understanding of the campground marketplace and adopted cutting-edge technology to stay ahead of its competition.

It ranks among the top 50 franchise operations in the U.S.

A 2011 Harris Poll found that 25 percent of American adults have stayed at KOA at some point in their lives in the last 50 years.

In Rogers, KOA got not only a visionary who could deliver on his dreams but also a man with great enthusiasm for his job and passion about camping. Rogers hails from a long line of Eagle Scouts (10 in his family, at last count) and has championed the Boy Scouts of America movement for decades. The strong-willed Rogers became a perfect fit for KOA.

“Obviously, at the heart of our business is the whole idea that we’re helping Americans and visitors to our country and Canada to get outdoors with their family and friends, and that’s certainly a part of our culture,” Rogers told Woodall’s Campground Management during an interview.

“I think another milestone is the consistency of our brand. We are known for a great experience no matter where they travel. And again, that’s a tribute to our wonderful owners and staffs.

“KOA.com, as a website, does twice the traffic of all the others in our business combined. It is a horse. It is a great source of information, and I think the technology that we’ve created to support that effort serves the entire industry well.” 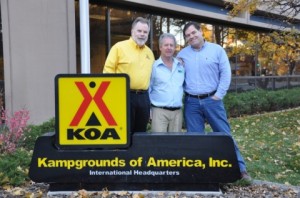 Rogers noted that KOA has developed a relationship with Big 4 Holiday Parks in Australia over the past seven years and is adopting many of their management practices.

“Lastly, the greatest milestone of our business and of KOA is that we’re guest-driven. We have done so much in the last 10 to 15 years to indeed orient ourselves and our evaluations, based upon the ultimate umpire, which is our guests.

This focus on the guest has become a hallmark of the Rogers era, according to Pat Hittmeier, who became KOA president early in 2010.

Speaking at a company picnic in Billings in August 2010, Tang said the company was hit hard at the beginning of the recession but made a quick recovery.

“We’ve done quite well in a very difficult economy,” he said. “It hit us hard in 2008 because of the price of gas, not only the price but how it rose to $4 a gallon so quickly. That was during the height of our season, in August and September. But in 2009, when the economy was at its worst, we were strong.”

Today, about 100 out of 484 campgrounds are still mostly one-night stops, Hittmeier said. Many KOAs offer a less expensive place to stay in some prime tourist destinations like Cape Cod, the Florida Keys and Highway 1 along the Pacific Coast in California. The largest in Orlando, Fla., features 900 camping sites and has a river running through it.

Campers choosing KOA over a motel want a taste of small-town America where the kids play unsupervised and strangers can still enjoy camaraderie around a campfire, he told the Billings Gazette.

“When you go and knock at the door at the Super 8 to introduce yourself to a neighbor, they call the cops,” Gast said. “It depends on what experience you’re after.”

KOA today has 458 franchises, plus 26 company-owned campgrounds. The company has 1,000 employees, with 73 based in Billings, Mont.

Look into The Future

Tang told the Billings Gazette he has no plans to sell the company, but he wants to build a corporate headquarters someday on land KOA bought along Zoo Drive and move out of TransWestern III in downtown Billings.

KOA has joined countless other businesses by looking to the prospects in China. “I’m not sure if anything will come up,” says Hittmeier. Selling a master license or partnering with a Chinese business are possibilities, he said.

KOA kicked off its 50th anniversary observance, really a yearlong affair, during the 2011 convention by presenting the first Darrell Booth Lifetime Achievement Award to Richard Cutler, president of Recreation Adventures Co. The company owns and operates 10 KOA campgrounds in North America, more than any other single franchisee.

“Richard Cutler epitomizes all that Darrell Booth stood for during his career with KOA,” said Kampgrounds of America Inc. CEO Rogers said during the presentation. “It’s because of people like Darrell Booth and Richard Cutler that a company like KOA can look eagerly ahead to our next 50 years.”

KOA followed up that presentation this past August, bestowing the award on Don Lowe. Lowe has spent most of his more than 30-year career with KOA as president of Sir Speedy, the franchise printing company that KOA bought out of bankruptcy way back in 1977. Sir Speedy and its network of worldwide affiliates span nearly 600 locations in 13 countries. Sir Speedy is part of KOA Holdings, the umbrella company that also owns the campground business. Lowe is also on the six-member board of KOA Holdings.