It’s been 25 years since Passport America launched its 50% camping discount club, and the organization is going stronger than ever.

“Back in 1991, they came up with the concept. Dresden and my father put in two years on the road, and it was hard work,” said Ryan Simmons, who joined the company 20 years ago.

Today, the club boasts more than 200,000 members and 1,900 campgrounds, and it offers more than ever. In 2010, Passport America began offering rallies for members.

One of the key benefits for campground operators is the growing slate of free marketing, advertising and social-media exposure Vern Simmons told Woodall’s Campground Management.

“There is absolutely no cost to the campground to become an affiliate of Passport America,” said Simmons. “We help fill up park’s empty sites on an as-needed basis and in return they earn revenue on sites they would not have filled. All we ask is that they offer our cardholders 50% off the nightly fee and off the hookups as well.”

Like many discount clubs, the application process to become a Passport America affiliated campground is done easily online. Once the campground is reviewed and the paperwork is complete, it goes live within 24-hours on the Passport website.

Passport could be coined a “directory-based” club as it prides itself in providing the consumer with both an online and printed directory that has become a well-known companion of many RV enthusiasts. 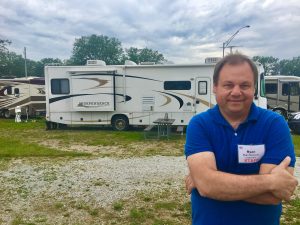 Ryan Simmons pauses at the Passport America rally in Goshen, Ind., this morning.

The latest addition Passport America has made to its offerings is a series of 35-day caravan trips across different portions of the U.S. In fact, Passport is wrapping up a rally today (June 22) in Goshen, Ind., that capped off a tour of much of the Eastern U.S., Ryan Simmons said.

“We’ve had a really great rally,” he told WCM, point out that 250 RVs were at the Elkhart County 4-H Fairgrounds with 487 people to cap off the event. But that doesn’t mean a pause for Ryan Simmons, who is now the Passport America wagonmaster.

“After this ends today, I have five days to get to Colorado Springs for our next one. We’re headed across Colorado, into Utah, Wyoming and ending in Rapid City, S.D.,” he said. Simmons leads the events in his motorhome and arranges for tour buses at each stop during the 35-day tours.

It’s a popular event for club members like John and Joyce Williams of Richmond, Mich., who enjoyed the tour of everything from the Grand Ole Opry to the Rock and Roll Hall of Fame.

“Ryan does it like a big, happy family,” John Williams said.

Joyce — who met her husband camping — agreed, saying, “He’s put his heart and soul into it.”

The duo is a fan of Passport America in general, since it helps make camping more affordable for some people.

That aspect, Ryan Simmons noted, has helped drive growth of the club not just in the full-time RVer segment, but also in younger Millennials. “They’re coming into the club in the form of weekend campers. We have a lot of Encore and Jellystone Park campgrounds, and a lot of younger campers are joining to visit campgrounds within a 200-mile radius. The discount makes a difference for them.”

Amy Rader (left) and Ryan Simmons of Passport America worked with 25 vendors and 487 club members at the rally in Indiana this week.

This week’s rally in Goshen marks the fourth time Passport America has been to the same site since 2011. Part of the draw, of course, is the local area, a big draw for many RVers since most of the RVs in the world are built within 20 miles of Goshen. There’s also the draw of Amish country, and the proximity to Chicago meant the group took a bus trip to the city’s Field Museum of Natural History one day this week.

But one key draw, Simmons noted, is the way the facility’s staff treats rally organizers. “I’ve done a lot of rallies over the years. In most cases, it’s the treatment we get that makes us decide whether to come back.” 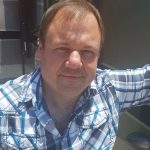 At 46, Simmons is pleased to be on the road so much these days with Passport America. “I feel very lucky to be able to do what I do, to be in this position — and I’m very thankful to the founders for paving the way.”