Paul Bambei made some persuasive arguments during his presentation at the Twin States Campground Conference on why campground owners in Vermont and New Hampshire should join the National Association of RV Parks and Campgrounds (ARVC).

But how many owners decide to join the national association after the ARVC CEO spoke to about three dozen of them on Nov. 10 at the Lake Morey Resort in Fairlee, Vt., remains to be seen.

“He gave a very strong sales pitch for the benefits of ARVC membership,” said Peter Daniels, executive director of the Vermont Campground Association (VCA). “He gave a lot of examples of large discounts for ARVC members. The music licensing was the biggest.”

As he has done at various state and industry meetings this fall, Bambei told his audience that ARVC is creating unprecedented exclusive value for its members. For example, its new music-licensing program that covers the three major licensors (BMI, ASCAP and SESAC) provides enough savings to offset the cost of ARVC dues next year, Bambei noted. 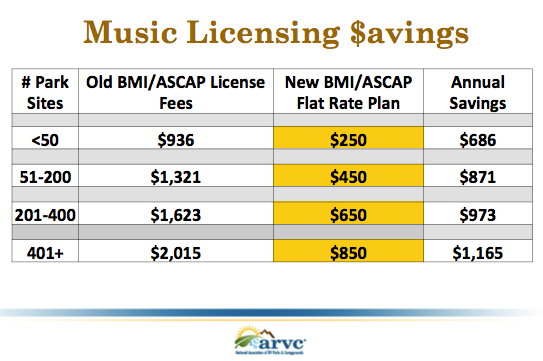 Chart courtesy of the National Association of RV Parks and Campgrounds.

The deadline to realize these savings for the 2013 season is Nov. 30.

“Several of the newer members indicated that is something they should look into,” Daniels continued, while not offering hard numbers on how many might join the national association.

Vermont campground owners are an independent lot, as just four of the 70 members of VCA also belong to ARVC at present, Daniels said. Daniels does not believe VCA has ever been an affiliated member of ARVC.

In New Hampshire, where there are about twice as many campgrounds as in Vermont, the participation rate is better. There, about 30 out of 143 parks that are members of the New Hampshire Campground Owners’ Association are ARVC members.

The association withdrew from ARVC 10 to 15 years ago for reasons forgotten by many of today’s owners, according to Gregg Pitman, executive director, but the spirit of working with ARVC is being revived

“I see the potential that ARVC membership would be to our members,” Pitman said. “All I can do is promote this as a great option.”

Though New Hampshire has no official ties to ARVC, Pitman has begun to collect ARVC membership dues on behalf of New Hampshire campgrounds and forwarding it to the national headquarters in Colorado.

This act puts New Hampshire in a unique relationship as cooperating with ARVC yet not being identified as a “cooperating” state, he concedes.

To promote ARVC membership in his state, Pitman said he will enlist some ARVC members to record video testimonials which he can share with non-members.

The keynote speaker, Megan Smith, commissioner of the Vermont Department of Tourism and Marketing, set the tone for the spirit of cooperation that Bambei brought up later in his talk when she outlined how Vermont is working with other “upper tier” states (New Hampshire and Maine) to promote tourism in the Northeast.

The 2013 Twin States Conference will be held in New Hampshire, most likely along the state’s seacoast, Daniels and Pitman said.