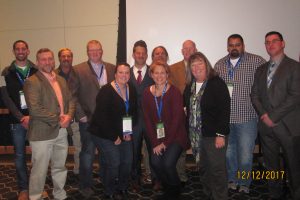 Past and present board members gathered at PCOA’s annual meeting.

With an average occupancy rate of 63% in 2017, the best in 30 years, according to Beverly Gruber, executive director of the Pennsylvania Campground Owners Association (PCOA), campground owners and operators in Pennsylvania had a lot to smile about when they attended the 54th annual PCOA convention and trade show from Dec. 11-13.

Described as “upbeat”, the convention, which was held at the Penn Stater Conference Center Hotel in State College, Penn., drew more than 280 guests and featured 17 educational seminars and 12 round tables, along with more than 70 vendor booths at the trade show.

“We used to host the event in November, but with all the other conventions going on during that month it was just too much for people,” Gruber told Woodall’s Campground Management (WCM). “So we moved it to early December and it has paid off for us. Ten years ago we had around 46-50 booths, so the event has definitely grown.”

The theme of the convention was “Making Connections” and featured keynote speaker David Avrin, who spoke on “Blink and They Are Gone.” His topic covered looking at your entire park from the point of view of the camper. He encouraged campground owners to give the customer an experience to last a lifetime – “visibility wins,” he said, and concluded with “It’s not who you know, it’s who knows you.”

Built with feedback from convention attendees, seminar topics included “Cash Management”, “Secrets Overheard in 250 Campground Restrooms” and “Pond and Lake Maintenance”, just to name a few. Round tables discussed topics such as “Maintaining Your Roads”, “New Profit Centers” and more.

“We have been doing the round tables for 30 years and some of our attendees like those better than anything else we do,” said Gruber. “It is great for us, because those don’t cost us anything. All we do is have a topic leader that directs the discussion. It gives everyone in the room a chance to give their opinion on a certain topic or ask questions.”

At only 15 to 20 minutes long, Gruber also noted that each attendee is able to attend at least four of the round tables.

“We really try to build a broad spectrum of educational seminars and round tables so that everyone findd something they are interested in,” she said. 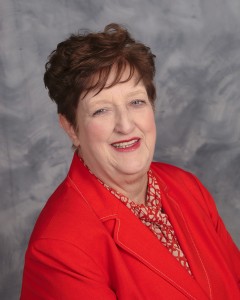 In 2018, Gruber said that the PCOA will continue to work on marketing and the association’s gift certificate program. Currently, the PCOA has 231 members, a number that continues to slowly increase.

On the legislative side, the PCOA hired a lobbyists two years ago to repel efforts by the state to implement sales taxes on all campground sites. Currently, campground owners only pay sales taxes and hotel taxes on cabins or structures that include a bed, not on tent or RV sites, where customers bring their own beds.

Gruber said that some state officials continue to really press for campgrounds to pay the additional sales tax. Gruber said that during the last session, “out of the blue” some state associations tried to raise the hotel tax from 5% to 12%.

“Put that on top of the sales tax and that is a lot for campground owners,” she said.

At an auction held during the convention, attendees raised more than $20,000, which will be used to fund educational endeavors, including the National School of RV Park and Campground Management.

Three retiring board members were recognized for their many years of dedicated service to the association: