PCOA Draws Over 200 To Annual Convention 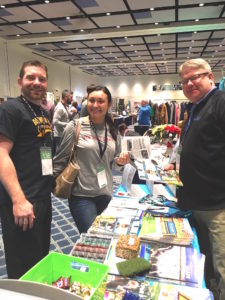 At the trade show, Kristen Strub and John Nuzzolo, of Dogwood Acres Campground, talk to Scott Murphy from PlayGo Company.

The 2018 Pennsylvania Campground Owners Association (PCOA) Convention was held at the Penn Stater Conference Center Hotel in State College, Pa., from Dec. 2-5, with the theme “Let’s Roll to Achieve Your Goals,” according to a press release.

More than 200 attendees from 88 registered campgrounds, which included 6 from out of state, were in attendance.

New to the mix this year was the addition of the Pennsylvania Recreation Vehicle and Campground Association (PRVCA), located in Camp Hill, Pa., PRVCA officials held both their winter board meeting and their show committee meeting during the convention and were present for the keynote address as well as the trade show.

Cooperation between PCOA and PRVCA strengthens Pennsylvania’s presence in the industry, according to the release.

The keynote speaker was Kampgrounds of America Inc. (KOA) President Toby O’Rourke, who spoke about the forward momentum in the campground industry. She shared some statistics and trends that show camping is growing across all demographics.

Fourteen seminars were held during the convention, including:

The convention also included 12 round tables and trade show that featured more than 70 vendors. 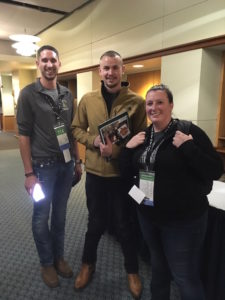 During PCOA’s annual meeting, which was held during the convention, the winners of the 2018 PCOA scholarships were announced. Doug Garman, of Pettecote Junction Campground in Cedar Run, Penn., and Laura Holmes, of Farma Family Campground in Greenville, Penn., were awarded a full scholarship to the National School of RV Park and Campground Management in Myrtle Beach, S.C.

Also during the annual meeting the following members were elected to two year terms on the PCOA Board:

PCOA handed out a number of campground awards during the conference, including:

The 2019 PCOA Convention will be held from Dec. 9-11 at the Penn Stater Conference Center Hotel in State College, Pa.,