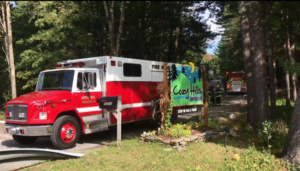 One person was taken to the hospital following the release of a large amount of pepper spray at a Litchfield, Conn., campground on Sunday (Oct. 7), according to NBC CT.

Emergency crews responded to Cozy Hill Campground for reports of a hazmat incident around 1 p.m.

After investigating, it was determined a large amount of pepper spray had been released causing people to feel ill.

A total of six people were evaluated by emergency medical services and one person was transported to the hospital.