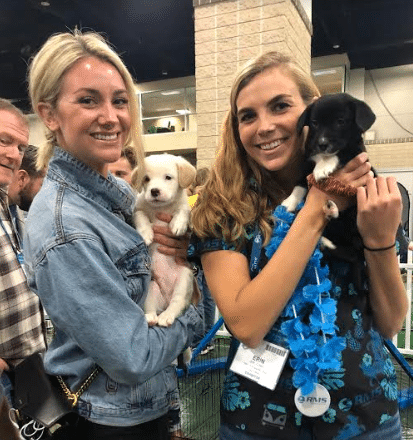 Dana Smith of Yale Advisors (left) and Erin Cullen of RMS North America with “Paws for a Break” pups.

The National Association of RV Parks and Campgrounds’ (ARVC) Outdoor Hospitality Conference and Expo (OHCE) closed out its action-packed schedule last night (Nov. 7) with an awards dinner and ARVC Foundation auction at the Knoxville Convention Center in Tennessee.

And while the estimated 720 attendees — a 40% increase over 2018’s conference — presumably came away with an array of productive information to apply to the operations of their respective parks, a small exhibit full of adoptable canines at the center of the show floor provided one of the top takeaways for show attendees who couldn’t seem to keep their hands off the lovable pups on display.

ARVC reported that it worked with a local animal shelter, the Young-Williams Animal Center, to get the pups to the show.

“We have what’s called ‘Paws for A Break,’ sponsored by Jamestown Advanced Products,” said Paula Horwitz, executive director of education and events for the Denver-based trade association amid a crowd of critter-appreciative show goers. “And what this is is an opportunity for members and non-members that are here at OHCE to come and cuddle puppies. And if they’re interested, they’re able to adopt them. But we really wanted to recognize that our members are being pulled away from their families, which includes their pets, for up to a week, sometimes more with travel. And it’s just a way to really bring some happiness and joy to them while they’re here.”

Matt Pucak, ARVC’s marketing and events coordinator, added, “We reached out to them (Young-Williams Animal Center) to see if there would be a partnership they were interested in looking into. We figured, what better way to get people to have fun than with puppies, to relax a little bit and for them as an opportunity to get the dogs out here in front of a group of people who love puppies and might take some home. And it looks like things worked out pretty well for several of them.”

Pucak and Horowitz reported that several of the pups did in fact find their “forever homes” as part of the first-time, pet-friendly gesture at ARVC’s Knoxville show, which featured about 140 campground vendor exhibits, representing an increase of about 22% over last year, and 35% of them were new to the show.

According to officials, the promotion worked well enough that the second annual “Paws for a Break” is already tentatively in the works for 2020’s OHCE Conference, Nov. 2-5 at Florida’s Daytona Convention Center.

“It is definitely something we will bring back,” said Horowitz. “Our members have been ecstatic about it. They’re happy to be able to come and snuggle puppies. And, you know, it’s another relationship-building element for the members who are here to see people connect on an entirely different level.”