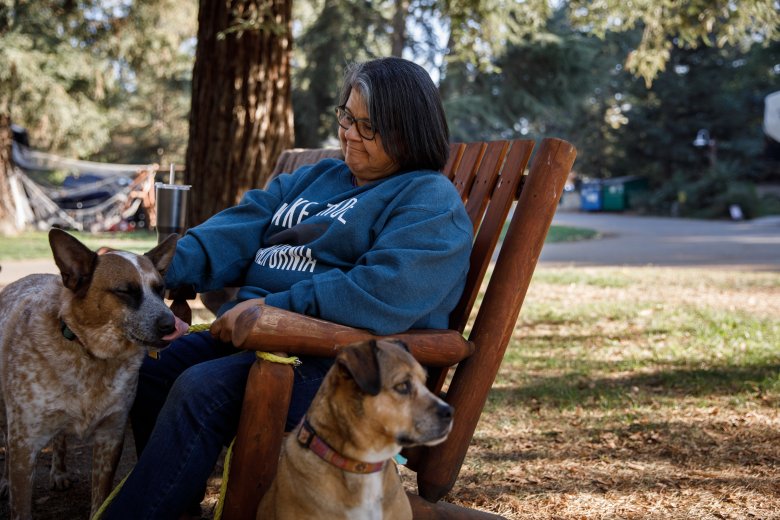 An evacuee, Lorraine Martinez of Windsor, spends time with her dogs, Archer, left, and Brownie, at the San Francisco/Petaluma Kampgrounds of America in Petaluma, on Oct. 29.

Like nomads, thousands of people fleeing the ferocious 75,000-acre Kincade Fire in California have been migrating south — town to town — trying to stay a step ahead of the destructive blaze that has been steadily expanding since it broke out near Geyserville last Wednesday (Oct. 23) night, according to The Mercury News.

Many of the more than 180,000 evacuees moved into the homes of family and friends to await news of when they can safely return, hopefully to homes that are still standing. But many others have had to sleep in evacuation centers, their cars and RVs, county fairgrounds and even campgrounds. Hotels across the region have been booked solid by fire refugees.

On Tuesday, the San Francisco/Petaluma Kampgrounds of America (KOA) in Petaluma, was teeming with evacuees allowed to take the campsites of recreational visitors who were asked to leave last Saturday.

Among them was Becky Ferris and her husband, who set up a tent there with neighbors and friends after leaving their home in Santa Rosa, near Coffey Park. For them, the memory of the deadly Tubbs Fire just two years ago was still fresh — its flames stopping only 300 yards from her home, Ferris said.

Pauline Wood, who owns the 312-site campground, said people flocked there during the Tubbs Fire, so she anticipated it would desperately be needed again.

“Places that can handle a large amount of bodies need to understand they have a responsibility,” Wood said.

Other parts of Petaluma were full of evacuees, too, including evacuation centers, the Sonoma Marin Fairgrounds and strip mall parking lots.