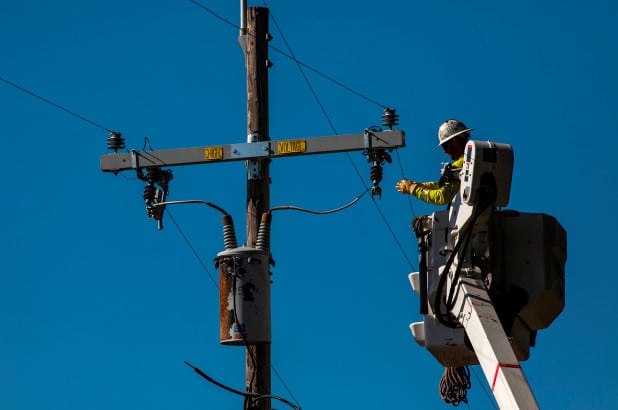 A PG&E contractor works on utility poles along Highway 128 near Geyserville, Calif.

Pacific Gas & Electric (PG&E) told a federal judge who has kept the troubled utility under a tight leash that it’s close — but not fully on target — to complying with all the wildfire prevention measures required under its criminal probation, according to Yahoo Finance.

The utility said it had fallen short of commitments it made under its own safety plan to inspect and repair lines, clear vegetation and cut tree branches near its power lines to maintain safety standards. The disclosure came in a written response Wednesday (Jan. 15) to questions raised by U.S. District Judge William Alsup, who is overseeing the company’s probation after PG&E was convicted in 2016 of gas-pipeline safety violations.

The San Francisco judge has peppered the company with questions for months as he seeks to determine whether its equipment is to blame for any of last year’s wildfires in northern California, as well as how the state’s largest utility managed widespread power outages as a fire prevention measure.

The company is forbidden under the terms of its probation from violating any laws. Alsup last year found PG&E had violated probation by failing to report that it reached a settlement in a criminal probe of its role in a northern California wildfire in 2017. After concluding that the company’s record on vegetation management was “dismal,” the judge ordered the utility to make improvements.

In Wednesday’s report, PG&E said it “recognizes it has more work to do” to continue to improve its tree trimming and other wildfire safety programs, but said it made significant progress in responding to an increased fire threat. PG&E also defended itself, describing to Alsup, as it has previously, the improbability of being able to patrol all its lines all the time.

It also noted that it wasn’t responsible for any deaths last year, and a decrease in the number of fires it caused.