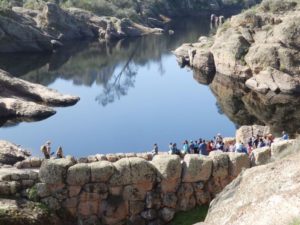 Pinnacles National Monument could face cuts in the future.

With poppies and other wildflowers in bloom, Bear Gulch filled with water and California condors soaring above volcanic peaks, Pinnacles National Park is in its peak season.

Park rangers say that April is the most popular month for hikers of all ages to enjoy one of the newest jewels in the national park system, located at the southwest corner of San Benito County, according to SanBenito.com.

The new year saw the opening of a new hiking trail from the western entrance to the park, east of Soledad, and another increase in vehicle entrance fees.

A seven-day vehicle pass now costs $25 — five times greater than when the new park opened five years ago — and another $5 increase is expected later this year.

Drastic cuts to national park staffing that had been included in last year’s budget proposed by the administration are on hold, but loom in the new budget year.

In the meantime, the parking is enjoying a bright spring, says Park Ranger Beth Hudick.

She said there are hiking trails that serve the most novice and the most experienced hiker, meandering among jutting volcanic spires, cliffs, and peaks in the dense chaparral country of the Gabilan Range. She also advised that weekday visits may be a better time for locals, avoiding heavier weekend traffic.

She is one of 40 staff that provide seven-day assistance to visitors.

Hudick notes that Pinnacles National Park is primarily a hiking park. The shorter trails are more accessible on the west side of Pinnacles. Park rules allow pets only in the paved areas of the park, including parking lots, picnic areas, and the campground, but are prohibited on all hiking trails. Pets must be on a 6-foot leash and be attended to at all times.