Pismo Coast Is A Refuge For Calif. Fire Victims 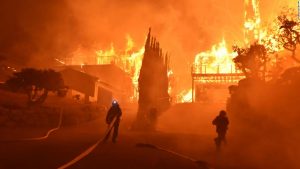 In this photo provided by the Ventura County Fire Department, firefighters work to put out a blaze burning homes early Tuesday, Dec. 5, 2017, in Ventura, Calif. Authorities said the blaze broke out Monday and grew wildly in the hours that followed, consuming vegetation that hasn’t burned in decades.

The Chirdon family had first told their daughter they were going camping when they packed up their RV on Monday (Dec. 4), leaving their home in Ojai, Calif., behind.

“As we drove out of town, there were many structures burning and [my daughter] noticed from the car and said: ‘Mom that house is on fire and that one is too.. There are a lot of fires here Mom’ and then she said: ‘We’re not on a surprise camping adventure are we?’,” Summer Chirdon said.

According to KEYT, the Chirdons first made their way to Carpinteria but there was too much smoke. Then they drove north to Santa Barbara and again were greeted with smoke, something they say forced them to leave in the first place.

“It’s really hard to be there now. The air quality there is terrible. Most people are leaving because of the air quality and not the fire danger,” Summer said.

Now her family has made themselves comfortable in Pismo Beach, at the Pismo Coast Village RV Resort. The property is allowing all fire evacuees to stay here for free.

“[Last winter], we went through some big storms. We had a lot of rain in a very short amount of time and really heavy winds. We did have some trees that suffered some damage and we just know what it’s like dealing with a disaster of clean up just on that scale but it’s not near what these folks are having to go through. We just wanted to make sure we could offer any help in any way we can,” explained Reservation’s Specialist Darrel Sisk, who is also past-president of the California Association of RV Parks & Campgrounds.