By: Woodall's Campground Management|Published on: May 22, 2018|Categories: Industry News| 0 comments 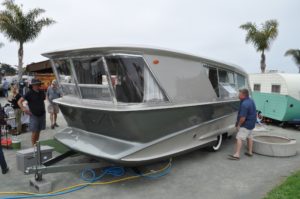 The event featured more than 300 vintage RVs, including four Bowlus “Road Chief” travel trailers from the 1930s — only 27 known Bowlus trailers from that period are known to exist today, said Steve Hingtgen, president of Montpelier, Vt.-based Vintage Trailer Supply, one of several vintage RV specialists who attended the May 19 event.

All the units were decorated inside and out in vintage décor as the owners celebrated trailers built between 1930 and 1979.

One of the most unique units at the event was a 1961 Holiday House Geographic that was restored by Justin and Anna Scribner of Flyte Camp, a Bend, Ore., company that specializes in the restoration and sale of vintage RVs.

Anna Scribner said there are only two of the 1961 Holiday House Geographic trailers in existence. The Scribners, who are regularly featured on YouTube, said they hoped to sell their restored unit for $250,000.

Private sellers of vintage RVs were also walking about the event seeking prospective buyers, including Reno Casola Venezia, a native of Italy who now lives in Mexico City. Venezia recently discovered a 1936 Airstream Clipper that somehow wound up in the Mexico City area.

He set up a special email — [email protected] — so that vintage RV enthusiasts can contact him about the unit.

Prominent collectors of vintage RVs also attended the rally, including Vince Martinico, who is believed to have the largest private collection of pre-World War II travel trailers in the world, according to Hingtgen.

While the Vintage Trailer Rally was open to the public, rally participants also organized their own private activities, including a pancake breakfast, a “Trailer Trash” Bash Potluck and pajama bicycle ride around the resort.