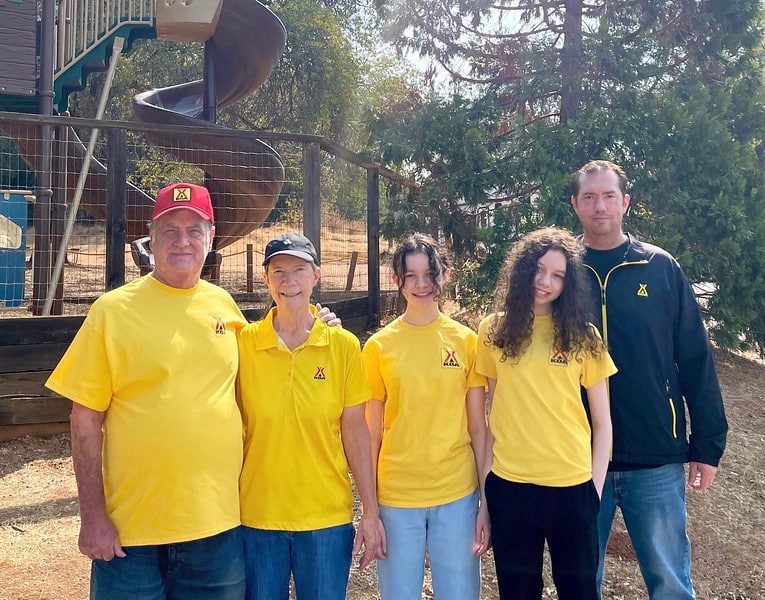 The Simoneau family, from left to right, John, Cindy, Abigail, Eva and Jay.

But the 112-site Placerville KOA in Shingle Springs, Calif., recently went further than most, providing not only discounted rates for 200 evacuees who fled the Caldor Fire but coordinating humanitarian assistance with other local businesses and nonprofit organizations, which provided evacuees with free meals, clothing and other assistance.

The evacuees started arriving at the Placerville KOA on Aug. 17 and spent close to a month at the campground while firefighters battled the Caldor Fire.

“Initially, we had evacuees in RVs and tents. Then, when the smoke started getting bad, we upgraded some of the tent campers into cabins,” campground co-owner John Simoneau said of the evacuees, who came primarily from Sierra Nevada foothill towns of Grizzly Flats, Pollock Pines and Camino.

“They were all evacuated because of the Caldor Fire. Some of them are still here.”

This was the fifth time in the past decade that the Placerville KOA served as a temporary evacuation center.

“We canceled hundreds of reservations and refunded people’s money so that the evacuees could stay with us,” Simoneau said, adding that the park refunded reservations so they could offer evacuees the sites at discounted rates that were 20% below its mid-week rates.

“We did everything we could to help them. We worked with local restaurants and the food bank and other businesses. We set up a donation section in the campground where people could bring donated items. We had food and clothes and pallets of donated water and toiletries from members of the community. The evacuees got a free dinner almost every night,” Simoneau noted.

He said the El Dorado Community Foundation and the Old Town Grill in Placerville provided many meals, along with other local chefs and organizations.

“Everybody (in the local business community) supported the evacuees. We just organized it all,” Simoneau explained.

One night, however, the Placerville KOA themselves bought enough Chick-fil-A to feed 175 people, which triggered a fraud alert on their debit card. “They said, ‘Nobody buys that much chicken!’” he said with a laugh.

Simoneau, who runs the campground with his son, Jay, and wife, Cindy, also provided evacuees with ice cream and homemade cookies to boost their spirits. “When we noticed the evacuees were going to be at the campground for the long haul, we began giving out free ice and scooped Gunthers ice cream to the evacuees,” Jay Simoneau said, adding, “My daughters, Abigail and Eva, also helped out by coming to the campground to bake all our evacuees cookies. They wanted to do something special for them.”

The Simoneaus’ generosity proved to be a costly move, however. To make room for evacuees, they canceled their previously booked reservations for Labor Day weekend, traditionally one of the busiest camping weekends of the year. By that time, however, many of the evacuees were able to return home, leaving them with a partially empty campground.

Dyana Kelley, president and CEO of Camp-California.com, said privately owned and operated campgrounds often serve as evacuation centers for people during wildfires, floods and other natural disasters. She commended the Placerville KOA and the Simoneau family for their generosity, noting that many people do not appreciate the sacrifices that the private park operators make when they decide to take in evacuees. 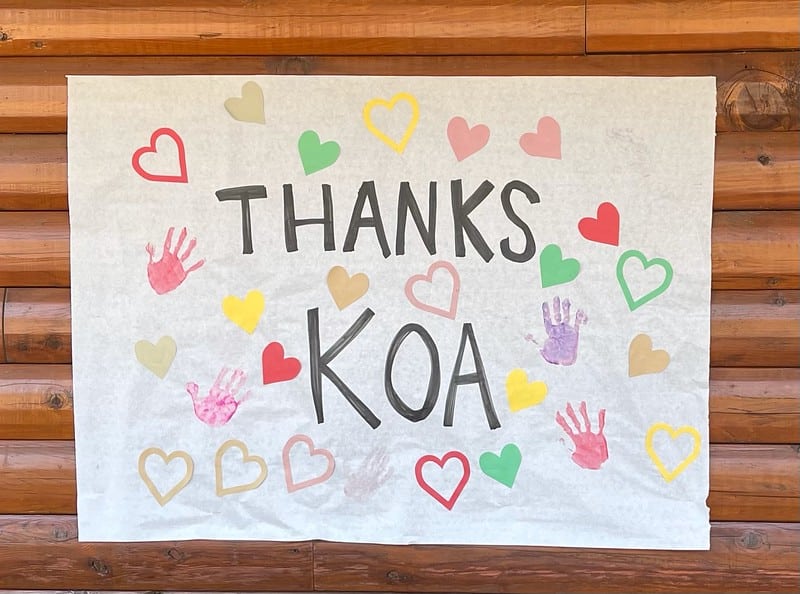 The Placerville KOA has receivwd dozens of thank-you cards from evacuees that stayed at the park.

“Most campground operators are members of their local community,” Kelley said. “They are small business operators who make great personal sacrifices to help those in need during wildfires and other disasters.”

The Simoneaus, for their part, are receiving scores of thank you cards, five-star reviews, and even artwork from the families who spent weeks at their campground while firefighters battled the Caldor Fire.

“We poured our hearts into caring for our evacuees and they showed their love right back,” Jay Simoneau said. “After being with the evacuees, we became like a large family.”

“We’re fire evacuees,” one evacuee wrote in an online post. “These folks have been so kind and patient with us. Have had their hands full juggling so much, even outdoor movie nites, food bank burgers, ice cream, water, (a) supply area of things for folks, a Cal Fire daily update board, all helping ease the stress level and we thank you.”

Another evacuee who calls herself “Grace Under Fire,” posted a review of her experience at the Placerville KOA on TripAdvisor.com.

“Never did we see ourselves as evacuees from a harrowing fire for nearly three weeks, but here we were. Vagabonds r us,” Grace Under Fire wrote, adding, “We were welcomed, accommodated, listened to with compassion and our anxieties were quelled. The staff was friendly and helpful. The staff that disposed of the mountains of trash was glorious. It didn’t stink!! So many people had animals, and since we were all in the same boat, the mood was respectful. Food was arranged every evening. A massive display of free clothes, toiletries, toys, groceries, blankets, paper products, water, diapers, … you name it, it was there. To top it off, real genuine N95 masks were distributed for patrons!!!! Really?! I can’t get them at work, let alone at a campground!!”

The Placerville KOA is affiliated with Camp-California.com, the travel planning website for camping enthusiasts across California. For more information about the Placerville KOA, visit its website at https://koa.com/campgrounds/placerville/.