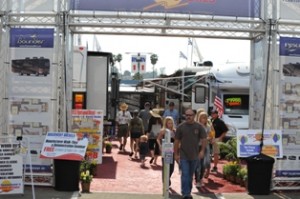 Total attendance for the 10-day event was 20,756, a rise of better than 6% over last year, according to RVIA Western Show Director Tom Gaither. Those numbers were kick-started by a strong opening weekend that saw attendance up by nearly 15% over 2011.

“We started quickly with a strong opening weekend that saw attendance really jump on Friday and Saturday before falling back a little on Sunday due to the extreme heat that day,” said RVIA’s Western Show Director Tom Gaither. “Overall, I’m really pleased with the attendance, business activity and the optimistic attitude of exhibitors and attendees.”

In addition to the higher attendance, RV dealers at the show reported a more robust sales environment. “We were very pleased with the results at this year’s show,” said Mark Rosenbaum of Mike Thompson’s RV. “We sold 248 units and hit $21 million in sales, which is a 67% jump over last year. We’re in a great business, selling fun, family and vacation time, and that is one thing that you will never be able to take away from the American public no matter what’s going on in the world.”

“We had one of our best shows in several years,” added Beau Brixey, general manager of Camping World of Valencia. “The crowds coming through the aisles were exciting to see and sales were good. We were busy everyday with test drives and writing deals for some of everything – small trailers, fifth-wheels and motorhomes.”

“Sales were definitely up this year,” said Frankie Barouti, vice president of Giant RV, which has locations throughout southern California. “We were close to our 2011 totals midway through the show.”

Exhibitors were also impressed with a number of enhancements made to improve the show experience. This included a new show layout that featured a central entry point through a mock campground; an app for Apple and smartphone users; an RV test drive area; and the RV Factory showcase.

“We really liked the new floorplan design and the new entrance to the show, which really put attendees in an RV and camping mood” said Barouti. “The test drive area worked great for our customers too.”

The California RV Show is the largest consumer show on the West Coast with exhibits spanning 572,100 square feet and more than 925 RVs on display.

The 61st California RV Show is scheduled to take place at the Fairplex in Pomona from Oct. 11–20, 2013. For more information , visit www.TheBestRVShow.com.