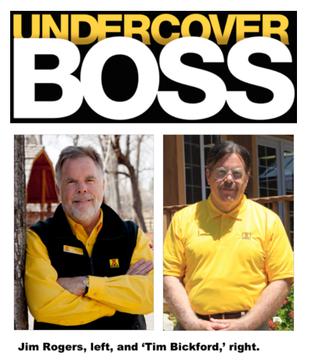 The 4-year-old Emmy Award-winning series, in which business executives leave the comfort of their corner offices for undercover missions within their own companies, gave Rogers and viewers a rare look inside KOA’s $200 million-a-year franchise campground business based in Billings, Mont. — a system consisting of 488 parks, 26 of them company owned.

When it was all over, Rogers revealed his true identify and spread some of his wealth – $165,000 – to the campground owners and staff he had innocently deceived over the course of the filming.

For those who missed the hour-long episode, Rogers, the gregarious head of the world’s largest campground chain, assumes his alter ego and stars as Tim Bickford, an unemployed accountant from San Francisco in the popular series filmed over 10 days last June. A frumpish fellow with his polo shirt all buttoned and shorts hitched up, “Tim” allegedly is a contestant touring those four campgrounds for the launch of a pilot TV show. 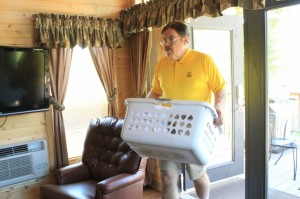 Rogers helps tidy up a cabin for the next guests.

He was assigned as a “front line” employee at each of the parks.

“My front line assignments on ‘Undercover Boss’ affirmed the importance of creating KOA systems that maximize the time that campground staff members can spend with guests,” Rogers told Woodall’s Campground Management, a sister publication of RVBusiness, prior to the episode’s airing. “I learned that the great people we have on the front lines can always use more time to better know and serve our guests. Our campground owners and their staffs are the real heroes of KOA. Being undercover gave me an unobstructed view of where our business gets done.”

As for his alter ego in the episode, “I’m more like Forest Gump than Jim Rogers,” says the affable Rogers, describing his disguise that included a dyed mustache and a pair of white socks. Rogers, who shaved his signature beard for the show, succeeds in coming off nerdy, once prompting Paul, the guest services manager at the Santa Cruz/Monterey Bay KOA in California, to remark, “If I was picking teams for a pickup football team, I would not pick Tim.” 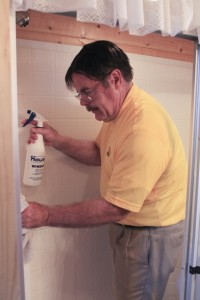 Paul, efficient and engaging, opens up to Rogers and shares his life philosophy, the essence of which is that family and friends come before money. Paul also notes that showing appreciation to employees is important, noting that he was disappointed when KOA upper management failed to show any interest in the park’s regular staff workers like him when they gathered at the campground a year earlier.

Rogers says he realizes that he needs to find more time to listen to other people as a result in part of Paul, who subsequently earned a standing ovation at the KOA convention in November when Rogers announced that he made a $50,000 donation to KOA’s Care Camps in Paul’s name.

Since Rogers spends part of each summer working at KOA campgrounds, taking on the variety of tasks given him – ripping out a tree with a backhoe, paving and doing routine maintenance – came easily to him. What he didn’t like, however, was some of the poor customer service he witnessed first hand, questionable or spotty business procedures and the lack of perceived appreciation from the home office.

Sadie, the overworked office manager at the Tower Park Resort in Stockton, Calif., loses her patience with a potential guest who is kept waiting on the phone for five minutes while she helps campers in her store and blames a system she calls “archaic, not user friendly.” Rogers, who stood by nonchalantly and witnessed the chaos, confesses later, “It was ripping me apart inside.”

At the Ventura Ranch KOA near Los Angeles, Rogers (who is afraid of heights) gets his now well-chronicled ride on an 800-foot-long zipline and helps to adjust some housekeeping practices. “We need to whip this program into shape up here. It’s clear we have work to do.” 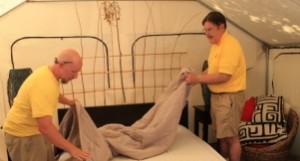 Rogers seems most pleased by the KOA in Williams, Ariz., near the Grand Canyon where owners Bruce and Lori are expanding their cabin inventory and want to install a golf course and go-cart track for their guests. When Tim mentions that his typical work week is 40 to 50 hours, Bruce replies that is “half a week here.” Rogers endorses their enthusiasm in striving to make their park the best KOA in the system.

Near the end of the episode, Rogers reveals his true identity to the campground staffs he worked with and announces some generous giving. Beyond the $50,000 donation to Care Kamp, Rogers gives him $10,000 to fix his travel trailer and $10,000 to finance a trip to see his granddaughters in Pennsylvania. Nathan at Ventura Ranch KOA gets an an all-expense paid trip to KOA’s training grounds in Billings and $5,000 to take his wife and three kids to a theme park. Bruce and Laurie in Arizona got $25,000 to purchase another deluxe cabin and $10,000 to spend on a vacation at nearby Lake Powell. 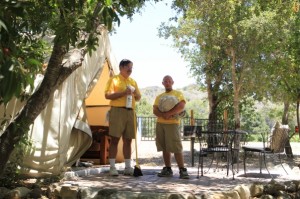 Rogers and Nathan discuss their jobs at one of the campsites.

In addition, he promises Sadie at Tower Park Resort that her software will be upgraded plus a job to develop KOA’s new outdoor program, $5,000 plus additional expenses for a week’s vacation with her family. Sadie, who has since left KOA to start her own skin care business, is reduced to tears by Rogers’ generosity.

All in all, Rogers felt the show provided good PR not just for KOA, but also for the entire campground business. “’Undercover Boss’ is great entertainment, but it also does a great service by taking the general public behind the scenes of popular companies,” he observed. “Every episode is a case study in business management.”

In particular, Rogers said he got a first-hand look at the cabin and lodging business at the four KOAs and came away with a better understanding of how to fine-tune the emerging “covered shelter” business at RV parks. “One thing that is true for the entire campground sector, not just KOA, is housekeeping,” he added. “We are moving as aggressively as we can into deluxe cabins but with that comes a housekeeping requirement. There are ways to do that well. We have spent a year finding the right suppliers, but we have work to be more consistent in the delivery of standards.

“I spent 18 years in the casino business,” Rogers continued. “I know it can be done. There is a process that is required. We have to deliver on this new service, and I know many owners are saying, ‘We’re not going to do it.’ In our case, we have a certain standard we have to live up to. We have a ways to get there.”

Click here to visit the CBS site and learn more about the episode.