Privatizing State Parks Can Save Them Or Wreck Them 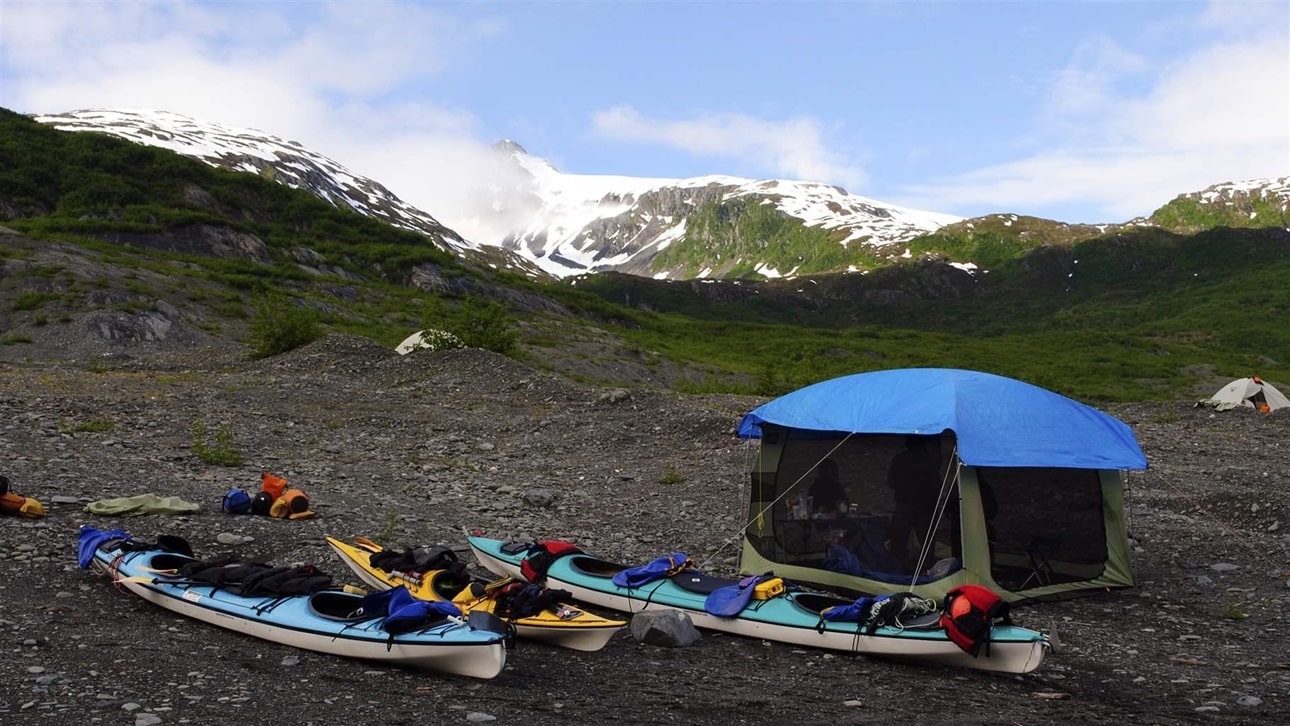 Kayaks lined up at a campsite on Alaska’s Shoup Bay. The nonprofit Valdez Adventure Alliance took over operation of the Shoup Bay State Marine Park in 2015, when the state was on the verge of closing it.

When Alabama closed Roland Cooper State Park in 2015 because of budget cuts, entrepreneur Warren Meyer saw an opportunity. Meyer runs Recreation Resource Management, a concession company that maintains campgrounds, builds cabins and provides amenities at state parks and U.S. Forest Service sites around the country, according to the Pew Institute.

The Alabama Department of Conservation and Natural Resources awarded the company, known as RRM, a contract to run the park on the agency’s behalf. The campgrounds, cabins and bathrooms reopened in 2016 for the anglers, campers and birders who visit the 236-acre park along the Alabama River.

“We were able to reopen the park within a year after it closed, and RRM has been running it ever since and doing a fantastic job,” said Rob Grant, assistant director of Alabama’s State Parks Division. “It’s a net profit for us, and we were losing money there before.”

“We’re being asked to come in and provide the capital to refurbish the campgrounds or provide amenities that governments can’t really appropriate,” he said. “We like the parks; we’re not trying to turn them into McDonald’s or used car lots. It’s easy to get these win-wins.”

But the role of private companies on public lands has come under increased scrutiny after a panel appointed by the Trump administration recommended last month privatizing national park campgrounds and opening them to Wi-Fi, food trucks and Amazon deliveries. Critics note that many of the panelists tapped by the White House were leaders of concession companies.

While the national plan is hotly debated, state park systems across the country already vary widely when it comes to privatization. Some states use private companies to clean bathrooms, sell souvenirs and rent kayaks. Others allow contractors to run campgrounds or parks. And a few states have solicited large developments in their parks or sold public land to private companies.

Sometimes, that hasn’t worked out so well.

Oklahoma sold much of the popular Lake Texoma State Park in 2008 to a developer that was planning a lakeside resort. The state pocketed $15 million and shed responsibilities for the park’s expensive maintenance backlog. The park’s cabins and hotel were torn down to make way for the new development.

Four years after the sale, in 2012, a news report from NPR’s StateImpact Oklahoma partnership called the site a “ghost town.” Not much has changed today, said Merle Steele, who served as president of the Friends of the Lake Texoma Association, an activist group that opposed the sale.

“They convinced the public that they were going to do great things, wonderful things,” Steele said. “As soon as the paperwork was done, everything was shut down, the hotel was torn down and that was it. The community lost the last tourist attraction in Marshall County. They made promise after promise after promise, until they got what they wanted. Then they let it go back to brush.”

There’s no one-size-fits-all model. Some states have vast wilderness parks, while others have more urban and historic sites. Many rely primarily on user fees, while others depend on money from state legislatures.

Each state has different budgets, responsibilities and types of parks — and different roles for privatization to play.

State parks have a difficult task. Last year, they saw more than 800 million visitors, according to the National Association of State Park Directors — far more than the over 300 million who ventured to national parks.

And while much has been made of the $12 billion maintenance backlog facing the National Park Service, the American Society of Civil Engineers estimated the figure at more than $95 billion for state parks. And states are giving less and less money to state parks.

But while states are spread thin, many advocates for public lands say states should always be wary when partnering with for-profit companies.

“There’s something uncomfortable in relying on profit-motivated enterprises to prop up public amenities,” said Steven Kirschner, who has written about concessionaires running U.S. Forest Service campgrounds.

Kirschner, an enforcement officer at the Colorado Oil and Gas Conservation Commission, found that more than half of the national forest camping sites were managed by concessionaires.

Some of them charged fees the U.S. Forest Service couldn’t; others did not honor agency passes.

“We don’t have legislatures willing to commit the resources necessary to maintain a robust public lands system, so we are necessarily turning to private enterprise,” Kirschner said. “But viewing public goods through a profit-and-loss lens is a fundamentally incorrect way to look at it. They were never set aside to generate revenue.”