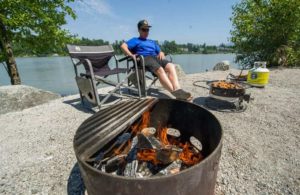 Alice Fox’s carbon footprint is going through the roof. Through her pocketbook, too. And even into her lungs.

Like so many British Columbians at this time of the year, the Surrey resident enjoys a wood campfire — in her case, while camping 10 days at Edgewater Bar, part of Derby Reach Regional Park, on the banks of the Fraser River in north Langley.

For now, wood fires are legal. But it’s just a matter of time before the province and region becomes tinder dry, and authorities place a ban on the time-honored wood campfire, according to the Vancouver Sun.

Campers need not despair. Propane fire pits with lava rocks are not only safer to use, but healthier on the lungs, and far less expensive than the little bundles of firewood sold in campgrounds.

Fox also has a propane fire pit, but didn’t bring it this trip.

“My preference is wood,” said the former Mountie. “I grew up in rural British Columbia, but as the fire season progresses I’ve now actually gone over to the propane fire, as well, just because I expect the (wood-burning) fire season to end pretty quick.”

More retail outlets are stocking up all the time on propane fire pits, selling them for about $110 and up.

Tony Dannhauer, general manager of Outland Living in Surrey, said sales have increased fortyfold since his company launched its made-in-China propane “fire bowl” in 2012, picked up a year later by Costco. The company claims consumers can get about 12 hours of low flame from one propane tank.