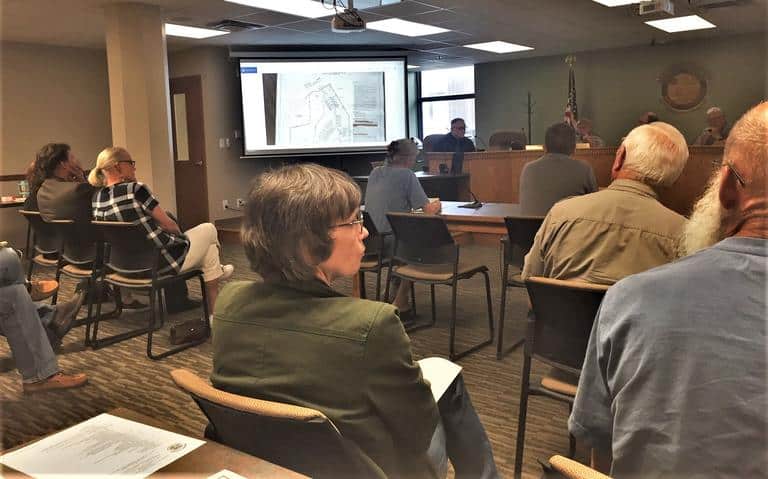 Elbow Lake residents showed up at the Becker County Board meeting Tuesday (July 20) to voice concerns about a proposed RV campground on the lake. (Nathan Bowe/Tribune)

A proposed RV resort on Minnesota’s Elbow Lake has generated a wave of protest from lakeshore owners and ran into some resistance from the Becker County Board on Tuesday (July 20), according to DL-Online.com.

Joey Stahl of Amenia, N.D., owns about 50 acres on and near Elbow Lake and requested a conditional use permit to put in a 49-unit RV park there. Elbow Lake is in Becker County on the White Earth Reservation, roughly centered between White Earth Village, Ponsford and Naytahwaush.

The RV park would be located next to the Jolly Fisherman resort, on the upper part of the long, narrow lake. It would be open each year from fishing opener to Oct. 1.

Anne Buelow, owner of the Jolly Fisherman Resort, spoke against the RV park at the County Board meeting Tuesday. “We’re not worried about competition,” she said. “We’re worried about losing our guests, some have been coming for over 30 years. They come to Elbow Lake for the peace and quiet.” That’s why Jolly Fisherman does not allow guests to use personal watercraft or ATVs.

She is concerned about traffic and the disruption that could come with a large RV resort, especially if it is not carefully managed by on-site staff.

Those who know and love the area “will truly understand the impact such a development will have on Elbow Lake,” she said.

More than 50 letters were received by the county on the proposal, most in opposition. A number of concerns were voiced, including increased water traffic, effect on wildlife, number of docks, tree removal, the threat of aquatic invasives and issues with flowing wells. This last would be resolved by the RV campground having one main well at the highest point and by minimal digging — water pipes would be buried shallow and drained and blown out each autumn to prevent freezing, for instance.

For Commissioner Larry Knutson, 49 units is at least eight units too many, since a park that size would require rezoning from agricultural to residential. He does not support that rezoning.