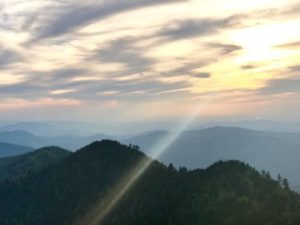 Bill Ramsey photographed the sun shining down on the Smoky Mountains from Cliff Tops on Mount Leconte in June 2017.

Lawmakers, led by U.S. Sen. Lamar Alexander, will be throwing some assistance to the National Park Service’s maintenance backlog if they can get enough votes for their National Park Restoration Act expected to be introduced Wednesday (March 7) morning.

The proposed legislation would help relieve the $11.6 billion National Park maintenance backlog that is chock-full of roads, buildings, campgrounds, trails and water systems that need attention, according to Knox News.

The National Park Service does not get enough funds appropriated to cover the backlog. According to data provided by Alexander’s office, the Parks received $2.9 billion in fiscal year 2017, but had deferred maintenance of $11.6 billion.

The proposal would create the National Park Restoration Fund that would provide funding for high quality maintenance needs that support critical infrastructure and visitor services, according to Alexander’s office.

The funding would come from onshore and offshore revenues from energy production done on federal lands.