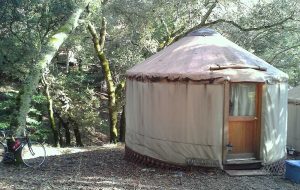 A yurt sits abandoned this summer near the lakefront of a property on Thongtree Road, south of Sunrise Beach.

A proposal to replace an abandoned yurt resort with an RV park in Camden County, Mo., failed to get a nod of recommendation from the Camden County Planning Commission.

According to LakeNewsOnline.com, in October, the commission held a public hearing on an application from Raymond Anderson to rezone a 31-acre tract on Thongtree Road from single family residential to general commercial. The stated intent was to develop a lakefront RV park at the site off of Highway 5, south of Sunrise Beach.

Residents opposed the rezoning, preferring a residential development even if it was a low income type as suggested as an alternative by Anderson.

According to P&Z Chairman Jacob Neusche, the property was too far from the commercial area on the highway to justify the zoning, and under the Camden County Unified Land Use Code, many other types of businesses could be developed at the site under the proposed zoning that might be more burdensome to the residential area.

The property was the location of a proposed yurt resort which failed to gain the necessary zoning to operate in 2005. A modern yurt is a portable round camping unit often built on a wooden platform. The former owner had already placed 10 yurts in this style on the lakefront tract prior to receiving the necessary commercial parks (C-2) zoning at the time.