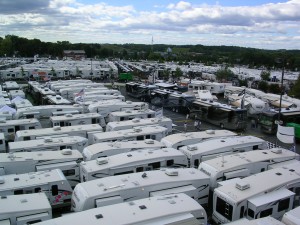 Display space is filling up for “America’s Largest RV Show,” set to run Sept. 10-16 at the Giant Center in Hershey, Pa.

As of Monday (July 9), organizers told WOODALLSCM.com that 45 manufacturers had signed on to display some 1,000 new models at the Hershey show and the list was still growing. The vendor count was 165 companies and space was virtually sold out.

“We’re tickled pink,” added Heather Leach, marketing and education director. “If someone comes in at the last minute, we’ll find space for them. We’ll have to make space for them.”

Dealers get their first look during Industry Days Sept. 10-11, followed by the public Sept. 12-16. It’s a complete show, offering a look at new RVs as well as thousands of accessories, countless service providers and free educational seminars.