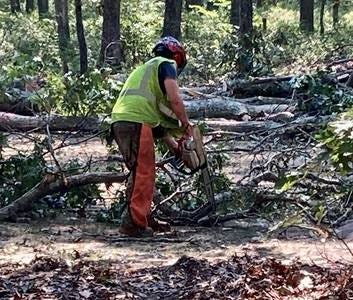 Tropical Storm Henri damaged 150 trees in Burlingame State Campground, one of the most destructive storms since Superstorm Sandy, according to The Providence Journal.

The Rhode Island Department of Environmental Management (DEM) hopes to reopen the park Aug. 31, according to agency spokesman Michael Healey.

Over the last decade, insect infestations and hot, dry summers have killed and weakened trees covering tens of thousands of forest acres in Rhode Island, the DEM said.

Weakened trees are especially susceptible to toppling in the high winds of storms and hurricanes.

“Rhode Islanders who don’t camp may not have a sense of how big Burlingame is. Making sure it’s safe for campers to return is a big job,” said DEM Acting Director Terry Gray. “Burlingame covers 3,100 acres, has 740 campsites, and is one of the biggest campgrounds in the eastern United States. I am grateful to DEM staff and tree crews who are checking campsite by campsite to make sure each site is clear of dangerous hanging limbs and leaners.”

Landlines are down at Burlingame, East Beach and Charlestown Breachway Campgrounds.

“Most of the dangerous work, the big, old trees that were leaning and the overhanging limbs, have been taken down,” Healey said. “We’re going site by site to make sure trees overhanging campsites are removed so people can pitch their tents.”