While both Echo Canyon and Royal Gorge offer whitewater rafting, they also provide lodging and other options to broaden their ability to capture income.

Many private park operators with lakes and frontage on rivers offer canoes, kayaks and other watercraft rentals.

Some river rafting outfitters, for their part, find it makes tremendous business sense to complement their guided rafting tours with campgrounds that feature everything from RV and tent sites to glamping tents and luxury cabins.

WOODALLSCM.com (WCM) recently visited with the CEOs of two of the nation’s largest rafting outfitters, both of whom eventually added campground and lodging operations to their businesses.

Both companies also found that the synergies between river rafting tours and campgrounds don’t stop there. Additional synergies can be developed with zipline tours and other recreational activities, as well as onsite restaurant services. After all, why let your guests spend their money elsewhere if you can provide everything they need?

Following are profiles of two companies, one in the Rocky Mountains and the other in the Appalachian Mountains, that demonstrate just how far the synergies between campgrounds and river rafting tours and other guided outdoor recreation activities can go.

Andy Neinas and his family acquired Echo Canyon River Expeditions 20 years ago, and have built the business into one of the largest river outfitters in the nation. But while Neinas is first and foremost a rafting professional, he also recognizes the benefits of pairing his family’s rafting tour business with accommodations, food service as well as other activities that enable them to capture more tourist dollars.

Neinas said one needs only to look at Vail Resorts in Colorado to see why it makes sense for a single company to offer multiple guest services. Vail Resorts not only owns its famous ski resort but loading facilities and retail outlets, he said.

“When you spend so much money to acquire somebody (through marketing),” Neinas asked, “why would you not want to capitalize on those other areas where the guest has needs?”

It’s a thought process that led Neinas to acquire a campground in Cañon City about a dozen years ago.

“What is my actual cost of letting you and your family of four tent camp?” he asked. “My cost is negligible. Now, if I can wrap that up with a river tour, you will spend a night or two.”

This glamping resort is located in a high desert area at the 6,300-foot level at the base of the Sangre de Cristo Mountains, eight miles west of Cañon City. While its furnished glamping tents are not available during the winter months, the cabins are available year-round.

But while Neinas has found strong demand for his luxury glamping tent and cabin accommodations, he told WCM he may explore the idea of acquiring or building a campground again to capture the camping segment of the market as he had done before. He added that his business base includes families, as well as church groups and youth groups.

Neinas also offered a few words of wisdom for private park operators interested in complementing their campground businesses with rafting tours. He cautioned that the costs of entry into the guided rafting tour business are significant, although the rewards are also worthwhile.

“If you are running a guided river program,” he said,  “that’s different from a livery where you rent a raft to someone and say, ‘Have a nice day.’ But even for a livery operation, you’re talking about a significant outlay of capital. I need a lot of space. Everything we own is big. Canoes are big. Rafts are big. Then you have paddles, helmets and lifejackets, buses with trailers. We have 10 diesel buses with a trailer. Where the hell are you going to park these things? You need to have the space to support your river rafting operations.”

Regulations vary by state, Neinas said, noting that Colorado requires river outfitters to obtain their licenses through the Colorado Department of Parks and Wildlife, which is a division of the state Department of Natural Resources. River rafters also need to obtain river rafting liability insurance before they can even begin training to offer rafting tours. Additional permits are required for busing operations to transport rafters to and from the locations where they will do the river rafting tours.

Staffing needs can be significant, too.

“For our river operation in a normal year, I have 55 guides. That’s not reservation staff or transportation staff. It probably takes 80 people to run our operation. That’s just to deal with the river,” Neinas said.

Additional staff are needed to run Royal Gorge Cabins and its foodservice business, The 8 Mile Bar & Grill, whose menu options range from burgers and BLTs to pork tacos, ahi tuna salads and dinner entrees with trout and salmon. The restaurant also serves 16 different Colorado craft beers, as well as domestic and imported wines and spirits. 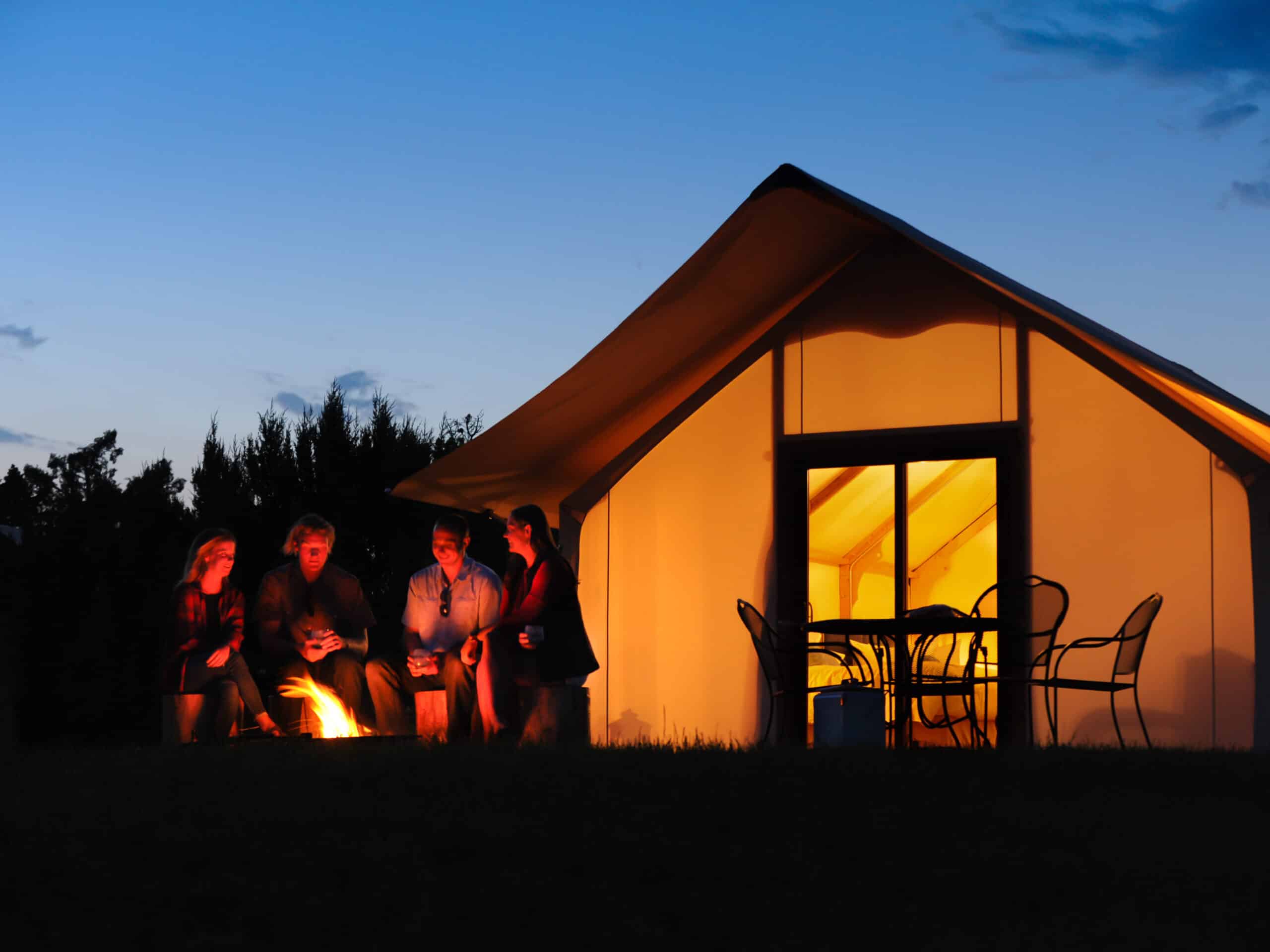 By providing lodging, whitewater rafting companies find that more guests are willing to stay for longer periods of time.

Things have been different this year, of course, with COVID-19, which has affected everything from the volume of business to staffing needs to the procedures Echo Canyon River Expeditions and Royal Canyon Cabins use to accommodate and entertain their guests.

“It has affected everything from the check-in process to how to load people into the rafts to how we handle the equipment. Everything we do has been touched by COVID,” Neinas said.

In an effort to adhere to social distancing guidelines, Echo Canyon River Expeditions is limiting the number of guests that can be on each raft. “We’re taking a hit on our boatloads,” Neinas said. “We are allowed to take only two parties on any given raft.”

But many guests are also willing to pay extra to have their own raft, he said. “If you have a party of three or four and if you are willing to pay for five seats, you will get your raft.”

Adventures on the Gorge

Two of the most popular whitewater rafting destinations on the East Coast are the New and Gauley Rivers in West Virginia. The New River is considered by many to be the second oldest river in the world after the Nile, and just like the Nile, it flows north, from the mountains of North Carolina through West Virginia.

The Gauley, for its part, is one of the top whitewater rafting areas in the world.

With investor backing, Class VI River Runners subsequently merged with three other West Virginia companies in 2008, including Mountain River Tours, Inc. in Hico, Rivermen in Fayetteville and Songer Whitewater in Lookout. The combined companies operate as Adventures on the Gorge and provide a wide range of rafting opportunities, from family-friendly trips for first-time rafters to exhilarating Class V and Class V rafting trips.

One 26-mile-trip on the Gauley River features more than 100 rapids, 53 of which are Class III and above. The company also offers overnight rafting trips, including trips with gourmet food and wood-fired hot tubs.

Adventures on the Gorge CEO Roger Wilson said 41,000 to 54,000 people per year enjoy his company’s rafting tours, most of whom live within a five-hour-drive of the company’s headquarters in Lansing, W.Va.

Several of the independent river rafting outfitters that later formed Adventures on the Gorge had their own campgrounds. But after the 2008 merger, Adventures on the Gorge built a new campground with 50 to 60 tent sites, four RV sites and 110 cabin accommodations, Wilson said. Thirty of the cabins are rustic units with no running water, while about 70 are furnished units with bathrooms and kitchens. The resort also has several luxurious one-, two- and three-bedroom cabins that are really like small homes.

Adventures on the Gorge also has three restaurants, although only one “open-air” restaurant is open this year due to COVID-19 precautions, Wilson said.

But while Adventures on the Gorge started as a rafting outfitter, Wilson said the company has since broadened its activity offerings to include rock climbing and zip line tours, as well as a “bridge walk,” an exhilarating 3,030-foot walk, 850 feet above the New River Gorge, on a 24-inch wide steel walkway that has been constructed underneath the New River Bridge, the longest steel arch bridge in North America. Walkers are strapped into harnesses that are attached to a cable to ensure their safety as they carefully walk across the walkway.

The company also offers numerous zip line experiences, one of which has five zips that are 500-feet-long and one stretch that is over 3,000-feet-long. Zipliners reach speeds of up to 65 miles per hour on some sections. Adventures on the Gorge also offers many other outdoor recreation experiences, including guided hiking and fly fishing tours, paddle-boarding and kayaking tours as well as laser tag and paintball activities.

“Even though our heart and soul is in rafting, I think we capture more of the tourist dollar with these additional activities,” Wilson said, adding that guests will stay for additional days if they have more activities to keep them entertained.

For those who would like to simply relax, Adventures on the Gorge also has a 3,000-square foot swimming pool with 10,000 square feet of deck space overlooking the New River Gorge. The resort markets itself as a venue for corporate retreats and weddings in addition to serving as a family vacation destination.

While both the New and Gauley Rivers run year-round, Adventures on the Gorge is typically only open from April to October because of the sharp decline in tourism during the winter season and the cold Mid-Atlantic winters, which plunge the temperatures of the river water into the 30s, which is far too cold for most people.

Of course, the COVID-19 pandemic has presented its own set of challenges this year. “COVID-19 interrupted our early booking time period. In April and May, we were 100% shut down and people were not booking reservations because they didn’t know what was going to happen,” Wilson said. “But once we were allowed to open, the bookings started and they haven’t stopped.”

Adventures on the Gorge typically has 50 year-round employees and as many as 450 employees during its peak summer season, including tour guides, housekeeps and bus drivers. “We’re probably at about 250 to 300 employees right now,” Wilson said during a late June interview.

“We will end up being down this year because of the way we have had to operate. But we are surviving,” Wilson added.