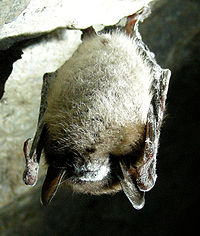 A little brown bat with white-nose syndrome. The mortality rate among infected bats is as high as 95%. The U.S. Fish & Wildlife Service (USFWS) has called for a moratorium on caving activities in the affected areas, and strongly recommends that any clothing or equipment used in such areas be decontaminated after each use.

It’s supposed to be the heart of winter, but bats in Great Smoky Mountains National Park have been out and about, leading park officials to warn visitors about encountering bats, National Parks Traveler reports.

The park’s wildlife staff recently received numerous reports of unusual winter bat activity. Normally, bats should be hibernating during the winter, but bats have been described as flying erratically during the day and diving down toward people, a park release said.

Park biologists do not know the exact cause of this unusual bat activity, but urge all visitors to exercise caution as bats are known to carry diseases such as rabies. Skin to skin contact should be avoided.

Great Smoky is one of a number of National Park System units where “white-nose syndrome,” a disease fatal to bats, has been detected. Bats with WNS appear to use up their precious fat reserves too quickly to stay in hibernation through the winter. Scientists theorize that the fungus, which looks like a white powder on a bat’s face, irritates the bats, making them restless and causing them to wake early from winter hibernation. They speculate that the affected bats could freeze to death or starve before the insects on which they feed emerge in the spring.