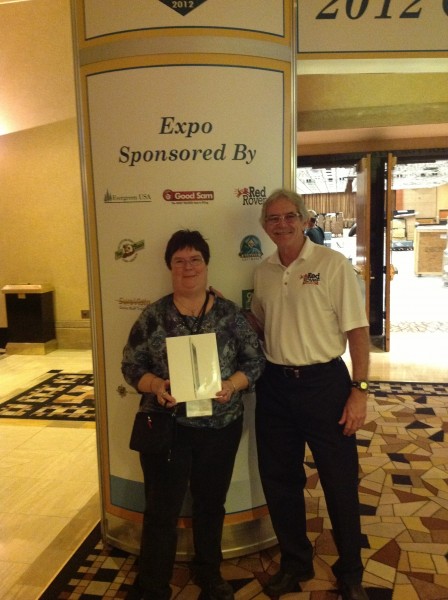 Robert Bouse (right), a partner in Red Rover Camping, with Cindy Hammer of Beaver Lake Campground in Custer, S.D., winner of the iPad given away at the recent ARVC conference.

The much promoted and highly anticipated introduction of Red Rover Camping to the campground industry took place at the ARVC Outdoor Hospitality Conference & Expo Nov. 29-30.

As a title sponsor of the conference, Red Rover’s position at the entry of the Expo set the tone that “red” is its signature color, according to a news release. Everyone that entered was given a large Red Rover bag and red koozie, as well as red Tootsie Roll Pops and Twizzlers. The Red Rover booth was crowded the entire show, according to Red Rover’s “Top Dog” Ben Carr.

“Our goal was to introduce a way for campground owners to augment their existing marketing with a program that will bring them new customers when they need to fill empty campsites, on a pay as you go basis, with no upfront costs or contracts associated. We did not anticipate that the overwhelming interest and desire to participate in the program would develop so quickly. We were signing people up from the time the Expo opened until it closed,” said Carr.

“We were hoping to get a good response from our teaser ads over the past several months, but we had no idea Red Rover would draw the interest that it did at the Expo,” said Red Rover Creative Director Jeff Wilson.

Red Rover’s other “Top Dog,” Robert Bouse, said, “Red Rover will be the community that people to go to for anything related to camping and RVing in the future.” He also noted that it’s a marathon, not a sprint, and it will take some time to get the word out, but it will build and become a major tool for campground owners to generate new customers and fill empty inventory without having to discount. “The response to Red Rover far exceeded our expectations and the Expo was nothing short of an overwhelming success,” said Bouse.

The winner of the iPad given away at the Red Rover booth during the Expo was Cindy Hammer of Beaver Lake Campground in Custer, S.D.