But a new report from the Natural Resource Defense Council and the Rocky Mountain Climate Organization outlines how these places Americans have pledged to preserve are changing as the planet warms, the New York Times reported.

One of the biggest threats to the Atlantic National Seashores comes from rising sea levels. The new report includes detailed maps which illustrate how a one-meter rise in sea level — predicted to occur in the next century — would completely submerge the vast majority of land in five of the seven protected coastal areas. Forecasts for stronger storm surges on top of higher sea levels is also bad news for these areas, many of which are fragile barrier islands already prone to erosion.

More directly, projections of temperature increases predict that by century’s end, if the beaches are still above water, they may not be places where people can cool off. Cape Hatteras in the summer will be as hot as Galveston, Texas, Assateague Island will feel like Key West, Fla., Canaveral will be as scorching as Desert Rock, Neb.

In the immediate future, just getting to the parks may become much more difficult. Instead of constantly repairing the roads, bridges and parking lots that will be routinely damaged by stronger storms, park officials are considering new options for visitor access. At Assateague, for example, there are plans to abandon the network of bridges and roads altogether, relying instead entirely on ferries for visitor transportation. 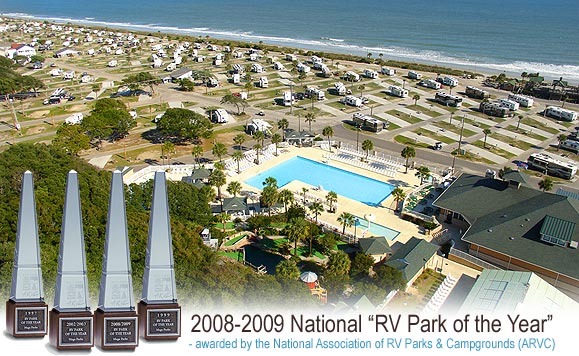 Rising sea levels in the next century threaten to wipe out prime coastal recreational areas, like this mile-long beachfront at Ocean Lakes Family Campground in Myrtle Beach, S.C., one of the East’s largest campgrounds.

“We hope that this report will Illustrate how climate change is affecting and will affect even more in the future, the special places that we know and love,” said Stephen Saunders, president of the Rocky Mountain Climate Organization. “This is not just about polar ice caps and polar bears and things that are distant from people’s lives. This is about beaches people are taking their families to this Labor Day weekend. We certainly want and hope and expect that this kind of information will get more people interested in protecting the climate and getting their members of Congress involved in taking serious action as well.”

Theo Spencer, senior advocate for the Climate and Clean Air Program at the Natural Resources Defense Council, said: “Massive and preventable damage to national seashores is too high a price to pay for failing to act on climate change. This report makes clear that if we don’t cut the amount of heat-trapping pollution we spew into the air, these special places that Americans love will never be the same.”