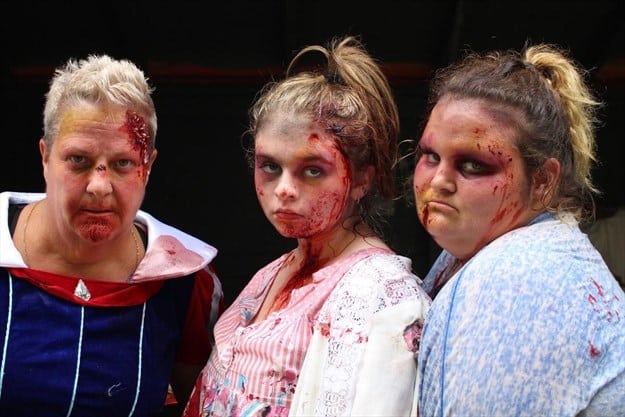 Zombies.jpg
Stephanie DeSira and Jennifer Weber didn’t survive their trip to Niagara Falls, according to The Standard.

“That was really fun, but we both died,” DeSira said with a laugh.

The Whitby friends were “infected” Saturday (Sept. 7) as they were unable to escape hordes of marauding zombies at the annual Zombie Mud Run at Campark Resorts in Niagara Falls, Ontario.

“We held our own for a while, but the zombies were just too good,” Weber added.

“This was our first time here and it was wonderful,” Jackson said. “The zombies definitely added a degree of difficulty.”

Almost 500 people participated in the event at the Lundy’s Lane campground.

The mucky route featured about 20 obstacles, such as mud pits, cargo nets and a frigid water slide.

Similar to flag football, participants each have three flags — called lifelines — which they had to protect from zombies along the course.

If they finished with at least one lifeline, they received a survivor medal. If no lifelines remained, they were awarded an ‘infected’ medal.

This was the seventh year Campark Resorts had hosted the event, which raises funds for Crohn’s and Colitis Canada.